Q&A: RUBÉN MEDINA LIVES A LIFE WITH POETRY AT THE CENTER

Rubén Medina has had a home in Madison longer than he’s lived anywhere else.

But Medina was born in 1955 in Mexico City, behind the hypothetical wall the new United States president wants to build. While he’s lived in the U.S. for nearly 40 years, lately he wonders if he’s become a target.

“You try to say to yourself you’re not, no, people are very nice,” Medina said. “You have to trust people … (but) you never know. Everybody in this country who feels they don’t belong here, they feel this vulnerability. They feel frightened, insecure.”

In recent months, Medina, a poet from Mexico City and a tenured professor at the University of Wisconsin-Madison, has noticed a new response to his poetry, work that often takes up questions of identity, culture and homeland.

At Writers Resist, a reading of poetry and fiction at the Gates of Heaven in Madison on Jan. 15, Medina read two poems: “Applying for Citizenship,” which he wrote some 15 years ago, and “Homeland,” which includes the repeated line, “This country has never been mine.”

“Applying for Citizenship” contains imagery that has grown more resonant since Medina wrote it. It’s by turns playful and challenging, with lines like:

“The welfare system should be abolished for big corporations.

“America should be dropped from the name of this country.

“Commercials on TV should be limited to one minute every hour.

“People who say this is the greatest country in the world should do volunteer work for the homeless, sing the national anthem backwards, or attend every death sentence carried out in the nation.

Medina read the same poem at a Madison Common Council meeting just over a year ago. He writes in Spanish, English and Spanglish, which is how speaks in his everyday life.

“Spanglish is my way to decenter English, to show that I live in a country where there are many languages,” he said. “I am challenging the reader to learn the other language. I’m saying, I live in a bilingual world, and I cannot betray that experience.”

Medina, 61, said poetry has been at the center of his life since he was a teenager in Mexico. He was a cofounder of the neo-avant-garde Infrarealist Movement in the late 1970s and came to the United States in the summer of 1978.

Now the chair of the Department of Spanish and Portuguese and a noted translator, Medina has been teaching at the UW-Madison since 1991. He’s a father of two adult children and two younger daughters, ages 11 and 8. Poetry, Medina said, helps him make sense of the world.

The Cap Times spoke to Medina about the resonance of his work, the importance of telling stories and how poets have always been out in front of a political resistance.

At Writers Resist, I was struck by the images in “Applying for Citizenship.” What inspired that poem?

It is based on an experience of coming back to the U.S., going through customs and showing my green card. The officers were looking at how many years I’d been in the U.S. and asking me why I had not applied for citizenship. It was a different reaction, so I decided to write a poem about it.

I make fun. It’s a composition of seriousness as well as playfulness.

So it’s not new, but it seemed very timely.

I think that’s one of the reasons to read it. I read it this Sunday — I went to Rockford to talk about translation. The person said, this poem really speaks to what’s going on right now. It’s incredible how poems you’ve written in a certain time still are speaking, or speaking better, in the current political situation in the country.

I think for some people, these things feel more personal than they used to.

Right now given the way the country is so divided, a lot of assumptions or ideas and ways to be that people were used to, they are no longer there.

They’re in crisis, being questioned or pushed to the side. Everybody’s feeling vulnerable. That kind of vulnerability allows people to understand each other, because we are communicating from a space of pain, a very insecure space. That allows for a kind of dialogue and communication that could be very productive in a way it has not been.

I liked the reactions people had to the two poems that I read. I’m sharing my experience and somehow that experience now is a lot more clear.

We are asking very fundamental questions about our society, our nation, our values, our understanding of who we are. What has been and where are we going to go?

What do you see as the role of writers in a time of political upheaval?

Literature and writing have been very linked to notions of resistance, to be able understand experiences, to provide meaning and illuminate everyday life, solidarity, love, affection, family. Always writing is related to forms of resistance, to express your subjectivity.

What happened at this reading, it was very special. You saw so many voices, so many different approaches to the same anxiety and the same things going on currently in our country.

How is that different?

Normally the way culture and particularly literature and poetry operates has been people in their own bubble. You have Latino writers and there’s a reading and there’s a Latino public. There isn’t a lot of mixing. There’s another (reading) that’s women’s poets, and they might be only white women poets.

Women’s issues should be as important for male writers. Where is the dialogue?

This reading broke that bubble. We came, somehow, to create a forum. It was about listening to other voices.

That dialogue is not happening the country because the country is so polarized. There is no constructive conversation going on. When you’re in your bubble, you don’t hear others.

Do you think poetry forms might change with this changing political landscape?

We are in a very special period. People need a sense of solidarity, a sense of resistance and struggle, a sense that what you’re experiencing as an American and a human being, that you’re not alone.

Listening to musicians, poetry, going into a march, talking to your friends — that’s something we need more than ever. There are moments when this public conversation needs to take place. 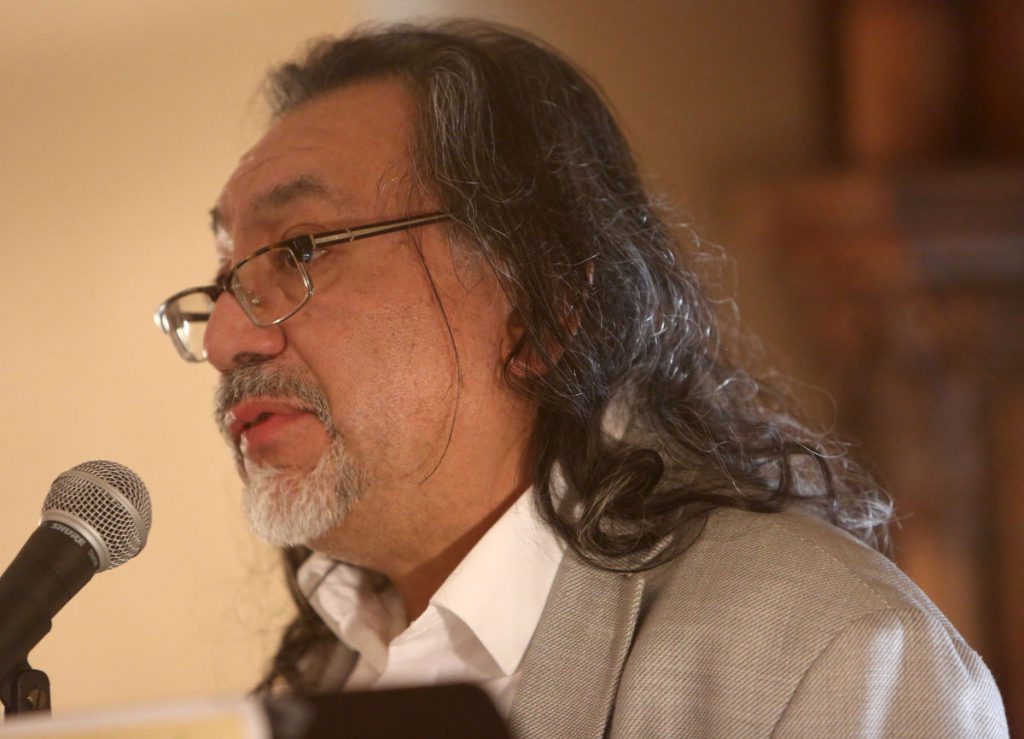