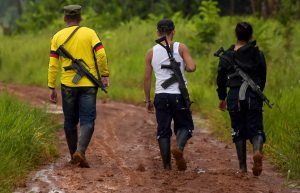 The main goal of a DDR Peacekeeping Process (disarmament, demobilization, and reintegration) is to contribute to the security and stability in post-conflict societies. In Colombia’s Peace Process with the FARC-EP guerrilla, the first two steps were completed relatively successful with the demobilization of 7000 combatants who gave to the UN Mission 8994 weapons, around 1.3 weapons per person. The third step, however, reintegration, which is vital to guarantee a stable and lasting peace is still uncertain. Former members of the guerrilla group feel that they have fulfilled their part of the agreement, but the Government has been acting very slowly on crucial issues such as the rural reform, the socio-economic guarantees of the population, the protection of their lives, and the reincorporation of them to the communities in post-conflict zones.

Margarita is a Colombian journalist who holds a BA in Mass Communication and an MA in Journalism. Currently, she is a doctoral student at the School of Journalism and Mass Comm of UW-Madison.

She has a special interest in Latin America, particularly, in topics related to political communication, emotions, and deliberation in conflict contexts. She has traveled around Colombia collecting information and talking with the different actors of the armed conflict: victims, combatants, displacement people, and former guerrilla and paramilitary members.

Her work experience is not limited to the academic environment. She is currently a columnist at Semana Magazine, one of the most important publications in Colombia. She has also worked as a journalist in Chile and Argentina, and as International Fellow for Journalism and Democracy at the Kettering Foundation in Dayton Ohio.