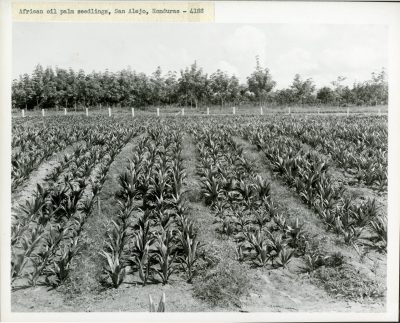 About the presentation: The United Fruit Company is infamous for its role in transforming both the physical and political landscape of Latin America. It converted millions of acres of tropical forests and farms into plantations of bananas, destined for foreign markets. The company is justifiably associated with the expansion of monoculture production; to say the least, it is not known for its interest in agricultural diversity. Yet, beginning in 1926, the company embarked on a little-known crop diversification program based at its Lancetilla Experiment Station, near Tela, Honduras. As a laboratory and botanical garden with one of the world’s largest living collections of tropical fruits, Lancetilla stood for more than four decades as an apparent counterpoint to the company’s myopic focus on bananas. This talk examines the company’s changing relationship to agricultural research and the multiple, shifting, and often contradictory meanings of diversity in the context of business, botany, economics, and agriculture in the twentieth century. In introducing oil palm to Central America, United Fruit’s crop diversification project ultimately served to replace one monoculture with another.

About the presenter: Megan Raby is a historian of science and environment whose work emphasizes the transnational connections of science in the US and Latin America in the nineteenth and twentieth centuries. Her book American Tropics: The Caribbean Roots of Biodiversity Science (University of North Carolina Press, 2017) explores the relationship between the history of field ecology, the expansion of U.S. hegemony in the circum-Caribbean during the 20th century, and the emergence of the modern concept of biodiversity. American Tropics was awarded the 2019 Philip J. Pauly Prize by the History of Science Society. Megan Raby is Associate Professor in the Department of History at the University of Texas at Austin, and earned her Ph.D. in the History of Science, Medicine, and Technology at the University of Wisconsin-Madison.

Please note that this talk will be offered in person; however, we are also offering a hybrid option via ZOOM. Please pre-register for the ZOOM option.