Lecture: “The endless crisis: an analysis of the socio-political situation of Peru” 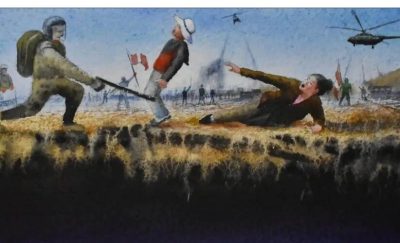 About the presentation: Peru presents the majority of problems of Latin American countries: inequality, poverty, corruption, or the inability of its rulers. Nevertheless, the political crisis and the continuous changes of presidents have become something characteristic of this Andean country, that situation worsened after 7th December, when the president Pedro Castillo try to dissolve the Congress and failed, and as a result, Dina Boluarte became the first woman-president of Peru and a serial of strikes aroused in all the Peru, especially in the south. The product of those protests was over 50 dead and many people and policies injured.

In this way, we have the same problem again and again, the coup of d’état or the idea of dissolving the congress is so common in Peruvian history, even since its birth, besides the contradiction between Lima (the capital) and the Andean zones of Peru is a big problem that in recent decades has not been given due attention. Likewise, the Peruvian constitution presents some shortcomings that allow the Congress  to vacate the president without real testing and only guided by their interests. So, the weakness of the Peruvian institutions, the contradiction between people from the coast and highland regions, and inability of the rulers has left Peru in an endless cycle of crisis.

About the presenter: Christian Fidel Revilla Arizaca is a history graduate of the Universidad Nacional de San Agustín.  He wrote his thesis about mining communities, and has also engaged in research about the use of technology in teaching including how it’s used at universities in Peru.  He completed his M.A. in superior education last year and was admitted to study for the LACIS M.A. at the University of Wisconsin-Madison.

*Please note that this lecture will be given virtually via Zoom; however, we will be livestreaming it in 206 Ingraham if you would like to watch it with us there.*