“Music of Paraguay from the Inside / Mba’epu Paraguai mbytete guive”

About the presentation: We will examine the Paraguayan polca and the Guarania, two of the most characteristic rhythms of the music from Paraguay. The music of the region is heavily influenced by the indigenous roots, colonialism, and the widespread use of the Guarani language. Many rhythmical elements of the polca and the Guarania are shared with other music from other countries in South America, like the Chamame and Malambo from Argentina, Joropo in Venezuela, Cueca in Peru, just to cite a few. Contrapuntal overlapping of meters, and a rich polyrhythm result in a very characteristic ‘groove’ that is the backbone of Paraguayan Folk Music. 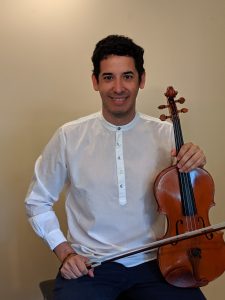 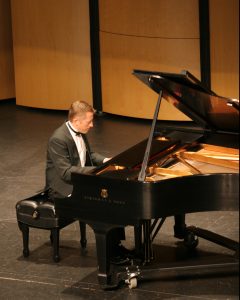 Daniel Luzko, Daniel Luzko obtained his Doctor of Musical Arts degree in Music Composition from the University of the Americas in Washington DC; postgraduate degrees in Music Composition and Piano Performance at the “Frederik Chopin” Music Academy in Warsaw, Poland; Master’s degree in Music Composition from the University of Kansas and Undergraduate degree in Piano Performance at the University of Kansas. Initially, he studied music composition at the Paraguayan-American Cultural Center of Asunción, Paraguay (Mc Naspy Award) and piano at the Conservatory of Music “Josefina de Gehre” of Encarnacion, Paraguay. Daniel completed higher piano studies with Jack Winerock and Andrzej Dutkiewicz. Among his most outstanding concerts are his graduation from the University of Kansas and postgraduate studies at the “Frederik Chopin” Music Academy in Warsaw and notably at the Cervantes Auditorium in Austria, Vienna, and Madrid, Spain. Thus he won the first prize in piano interpretation “Sigma Alpha Iota” of the state of Kansas, USA. He also appeared as a soloist on piano before the Symphony Orchestra of the City of Asunción. Daniel has presented piano duo programs at national and international festivals with Nancy Luzko. The programs included originals and arrangements of Paraguayan and Latin American music. Daniel is a tenured professor in Music Composition and Music Theory at Irvine Valley College in California, USA. He also teaches and lectures in Latin America and other countries. The most recent ones were the Conservatory of Music of Puerto Rico, Federal University of Rio de Janeiro, University of Venezuela, University of the Andes in Colombia, University of Heredia, Costa Rica; School of Music of Vienna, Austria; and National Radio of Spain. He obtained recognition from the Senate of Paraguay as “Musician of the Year in 1998” and the US government as an immigrant with exceptional skills in the arts. 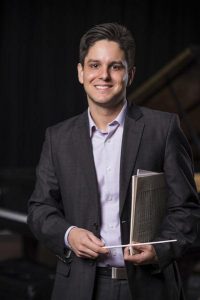 Ramiro Miranda, DMA, is Assistant Professor of Violin/Viola and Conductor of the Emporia State University (ESU) Symphony Orchestra and ESU Chamber Orchestra in Emporia, KS. Dr. Ramiro Miranda enjoys an active career as an orchestral conductor, violinist, and educator. As associate professor at Emporia State University, he teaches upper strings and conducts the Emporia Symphony Orchestra and the ESU Chamber Orchestra. He has conducted several orchestras at the collegiate level, including performances of Mark Adamo’s acclaimed opera “Little Women” and Mozart’s “Cosí fan Tutte” with the University of Missouri-Kansas City Opera program, and numerous academic orchestras in the United States and Latin America. He is a guest conductor of Midwest Chamber Ensemble in Kansas City, as well as the Asuncion City Symphony Orchestra and Camerata Miranda in Paraguay. In addition, Miranda appears regularly as a clinician at high school music programs in the United States. He was an assistant conductor of Colorado MahlerFest XXVII, and participated in several conducting and orchestral performance workshops in the United States, Brazil, Argentina, Spain, and France, with instructors of high acclaim such as Paul Vermel, Mark Shapiro and Enrique Garcia Asensio. As a violinist and chamber musician, Miranda has given solo recitals in the United States, Latin America, and China. He performs the standard solo and chamber violin repertoire, and he is a member of the Wichita Collaborative String Quartet where he performs a wide variety of styles, including jazz and avant-garde. He has performed in ensembles supporting Eugene Friesen, Howard Levy, Glenn Velez, Mike Marshall, and Darol Anger. 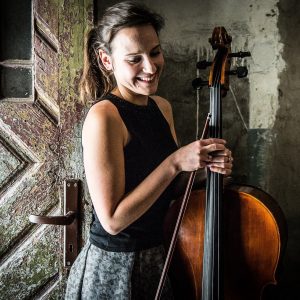 Magdalena Sas, a cellist, performs internationally as a solo, orchestral, and especially a chamber musician. A graduate of the Royal Music Conservatory in Brussels, Belgium and Academy of Music in Cracow, Poland, she also completed a postgraduate course in string quartet performance at the University of Music and Performing Arts Vienna and was a member of the renown European Chamber Music Academy in Austria. Magdalena was invited to perform at multiple international chamber music festivals including: Consonances Chamber Music Festival in France, Mozartiade in Germany, Ad-Libitum in Poland, Norfolk Chamber Music Festival in USA, and Paschim Rang in India to name a few. She had a privilege to share the stage with Ivry Gitlis, Gary Hoffman, Philippe Graffin, Marie- Luise Neunecker and many other acclaimed musicians and appeared in renown concert halls such as Musikverein and Konzerthaus in Vienna, BOZAR in Brussels, Witold Lutoslawski Studio in Warsaw, NCPA in Mumbai. As an orchestral musician, Magdalena had the opportunity to collaborate with ensembles such as the Australian World Orchestra, the Israeli Philharmonic Orchestra, and was a guest member of the Sinfonietta Cracovia, the Beethoven Academy Orchestra in Poland, YES Camerata and Hulencourt Soloists in Belgium, and SFK Orchester in Austria. While working in India, she collaborated with world-famous Indian musicians: Zakir Hussain, Rakesh Chaurasia and Sabir Khan, and appeared as a soloist at the opening concert of the Royal Opera House in Mumbai. Passionate for teaching, Magdalena is a faculty at the Emporia State University String Camp in Kansas and Community Music Lessons Program at the University of Wisconsin-Madison. In 2015-17 she was in charge of the cello program at the Mehli Mehta Music Foundation and volunteered as teaching artist at the Happy Home and School for the Blind in Mumbai, India. In 2019, she participated in the MusAID Teaching Artist Summer Lab conducting individual and group classes as a teacher for EL SISTEMA in San Salvador. A Fulbright alumna, Magdalena is a recipient of the Paul Collins Wisconsin Distinguished Fellowship (USA), and is currently a doctoral student in the Mead Witter School of Music at the UW Madison, under the tutelage of professor Uri Vardi. In 2019/2020, she will represent Poland as a member of the international Global Leaders Program.