Queering the Cuban Screen, other faces and desires on the new Cuban Cinema 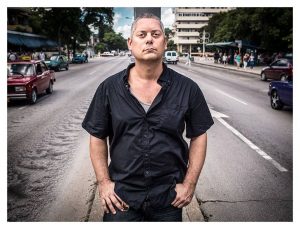 In recent years has emerged in Cuba an interesting movement of young independent directors. With modest efforts and the support of official institutions, embassies, and foreign producers, they have been creating a new image of the country through their film projects, showing conflicts and tensions of Cuban society that the discourse of the State has not presented before.  Discussing sexuality and its variants in Cuba, in the most recent decade, is an issue that has become visible but still battles against taboos of many types, such as moral, historical, ethical and political.

Among the set of these new productions, several directors have approached this discussion through documentaries and works of fiction. Two of those projects, Camionero, by Sebastián Miló, and Batería, by Damián Saíz, demonstrate the existence of different ways to create a valid and unpostponable discussion about the queering issue in a nation like Cuba.

Poet, critic, and playwright, Espinosa is also one of Cuba’s most visible gay activists, having organized events such as the Jornada de Arte Homoerótico, the first of its kind in the country (1998-2000), and, together with Víctor Fowler, the island’s first conference on Homoerotic Cuban Literature.