The Caravans, The Phenomenon that Changes the Face of Emigration 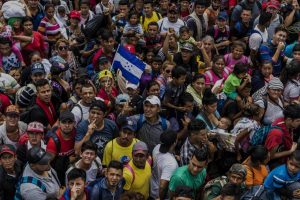 This talk aims to explain the novel phenomenon of caravans of Central Americans and how they have changed the way to migrate in search of safer options to cross Mexico and reach the United States. It will explain that migrants who abandon Central America are not leaving the country, they are running away from the country, and their profile is different from the traditional migrant. They are, in many cases, “refugees” protected by international law, as were Jews during the Nazi era or Bosnians during the Balkan war.

At the same time, caravans have changed the face of emigration, which has ceased to be something individual and clandestine to be collective and in broad daylight. Furthermore, caravans have also become politicized and a symbol that humiliates and reminds the failure of the Central American governments, due to decades of bad governments, corruption, and weak strategies to end the violence and poverty.

Far from dissuading, every time that Donald Trump tweets about migrant caravans, more and more people join this phenomenon because migrants know that if Trump is paying attention to them, they would have some visibility and more opportunities.

Another important novelty of this phenomenon is the change of government in Mexico and the arrival of Andrés Manuel López Obrador to the Presidency. The fact that Mexico opens borders and legalizes people immediately, would humanize migration and hit the mafias of human trafficking, but at the same time, this public policy  is assuming that in the coming months, thousands of people will be crowding at the southern border of the United States looking for an entrance to the country in any possible way.

Jacobo has been a correspondent in Latin America for the last 16 years, 12 of them for El Mundo newspaper. Between 2014 and 2016 he was a correspondent for the US agency The Associated Press in Colombia and in the Andean Region, and since 2017 has worked for El País newspaper in Mexico and Central America. He has covered more than 30 elections on the continent, two coups d’état (Honduras and Venezuela) and many natural disasters, including the Haiti earthquake. In Asia, he was sent to cover the Afghanistan war in 2001. In 2014 he reported on the political upheavals in Egypt and the beginnings of the wars in Syria and Libya. He has published in Clarín(Argentina), Soho (Colombia), El Universal (México), CNN and La Tercera (Chile), and his reports on the end of the war in Colombia have been published in The New York Times and The Washington Post. He has also contributed to two collective works on journalistic coverage and Spain’s role abroad, published by Salamanca University.