“The Conquest of Mexico-Tenochtitlan, 1521-2021: Domination and Oppression vs Resistance and Liberation” 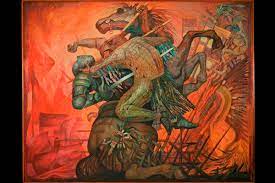 About the presentation: The presentation discusses the conquest of Mexico-Tenochtitlan, its consequence within the context of the colonial order established by Spain, its parallels and continuities with the present situation in the American Continent, particularly in the United States, and the lessons of the future from these historical events and processes.

About the presenter: Jesús (Chucho) Alvarado is a LACIS Honorary Fellow, with a PhD degree in History of Science from UW-Madison and an MA in Philosophy from Catholic University of America. From 1970 to 1975, he was Director of the Latin America Division, National Center for Social Communication, Mexico City. From 1973 to 2014, he was Professor-Researcher of Humanities and Social Sciences at the School of Mechanical and Electrical Engineering, National Polytechnic Institute, Mexico City. There he was Director of the Research Project on the History of Technology in Mexico, National Center for Machine Tool Research, 1985-1996. From 1987 to 1994 he was keynote speaker on the History of Mexico, at the Global Awareness Through Experience Program (GATE), Mexico City. In 1991, he was a guest speaker in U. S. academic institutions, on the issues of Discovery vs Exploration, and of the Invasion, Conquest and Colonization of Mexico, which he continues to study.

VIEW THE PRESENTATION VIA FACEBOOK LIVE | RESERVE A SEAT IN 206 INGRAHAM HALL FOR THIS LECTURE: