Throughout the year, Israel Pechstein of the Brazil Initiative had heard one of his Portuguese students talk about “going to the Olympics.” He thought it sounded fun, until he finally found out this actually meant “participating in the Olympics!” The student is Matt Hutchins, and he will indeed be competing in the Olympics for Team New Zealand. We caught up with Matt to learn about this amazing accomplishment and to see how his Portuguese will help him in this unique opportunity.

So Matt, what are you studying here?

I’m a junior in school here and I am a history major because I find it the most interesting.

How long have you been swimming? At what point did it become a real passion of yours?

I’ve been swimming for a while now, I think I started swimming competitively when I was about 10-11 but I didn’t begin to take it seriously until I was about 14. I think I was 15 when I stopped playing other sports and really focused on just swimming.

How did you qualify for the Rio Olympics?!

Qualifying for the games this year was a little crazy. So my trials meet in New Zealand was the same week as our NCAA nationals here (in the U.S.) so I couldn’t do both. Luckily Swimming NZ let a group of US-based swimmers go qualify at the Canadian trials a bit later. So I went up to Canada and there it was the same as their (NZ) meets. I had to swim my races and each race has a set time standard so as I met that criteria, I made the New Zealand team. 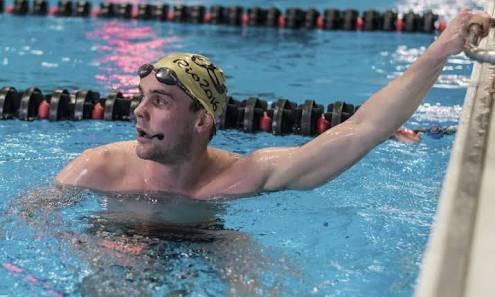 What has been your biggest obstacle in qualifying?

I think the biggest obstacle was definitely the conflict between the NZ meet and NCAA meet. That meant I really had to be ready to race for a longer period of time, and being able to stay mentally and physically ready to race was quite hard.
Is your interest in Portuguese related to the Olympics in Brazil? Or was it just a lucky coincidence?
Taking Portuguese was half coincidence and half wanting a head start on a trip to Rio. I never took a foreign language in high school so I need a few semesters here and when I found out that Portuguese was an option I kind of thought that it could be helpful going forward as I started taking the class a year ago.
What was it like interacting with international athletes at the trials?
Being able to go and race against other top athletes from around the world is always cool. At trials I kind of kept to myself a little as I didn’t really know many of the Canadians, but to be amongst the atmosphere, especially as some of those swimmers are at the top of their events in the world, that was very cool.
How do you plan to use your Portuguese knowledge in Brazil?
I’m definitely going to try use Portuguese while I’m in Brazil, even if it is very basic phrases and things like that. But I have asked for “go to” phrases to help me with directions and where to find a restaurant or something. I’m a little nervous about going and trying to speak Portuguese and just completely messing up what I say haha.
We wish Matt the best of luck in the 2016 Olympics! He has already earned a few more fans in the LACIS office!