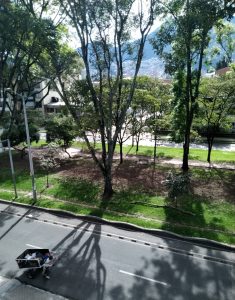 I spend the quarantine days in my old, quiet apartment, in which, from the window, I can see the shape of the Andean mountains that embrace the Eastern part of Bogotá. Groups of little houses are embroidered into that mountainside, like honeycombs, forming one of the numerous self-built quarters in this seven million inhabitant city. Since the 1950s, more than half of the city’s growth corresponds to initially illegal barrios, made of self-made, multi-family houses. Most of the people living there came to the city fleeing from the countryside at some point in the last 60 years of this country’s painful history of war. They, or their parents, or their grandparents, were violently uprooted from their lands, which they cultivated and cared for, which in turn nourished them. Those distant neighbors, like half of the Bogotanos, are probably informal workers, depending exclusively on their individual ability to make every day’s earning – cleaning houses, participating in the black market of almost anything, selling home-made food on the sidewalks. They are now confined to their houses, strictly policed. As in other poor countries, where the healthcare systems have been collapsed for decades, the blow on people’s lives by both the pandemic, and the extreme measures to counter it, is brutal.

I also look at the world through another window: the screen of my cell phone. I participate in some networks of enthusiastic naturalists and committed environmentalists. I get to enjoy the watercolors of artists who are painting the unique diversity of Colombian birds, see delicate photographs of moths on jasmine flowers, look at an anteater walking along an otherwise noisy road and listen to the conversations of moved citizens recording her. People are asking where to get seedlings for growing vegetables at home, recovering old recipes for cooking tubers, exchanging seeds, teaching each other how to tell edible from non-edible mushrooms. They are outraged by the continued killings of local social leaders (eight in the first two weeks of the quarantine); they are supporting circuits of peasants and former guerrilleros’ food production and fair distribution, and sharing pictures of the hand-painted signs indigenous communities are putting across rural roads for protecting their territories against the contagion.

Environmental historian Gregg Mitman recently said in an interview: “Epidemics always expose the fault lines in society; they make visible the deep fissures in our social safety nets, or lack thereof.” The fault lines in this profoundly unfair country are terrifying. It is difficult to keep one’s imagination alive. However, I sometimes wonder if the multiple entanglements and affective alliances between peoples and natures –the ones that have been broken for generations, the ones that survived, the ones that are being invented – in one of the most bioculturally diverse countries in the world, might thrive through the system’s fissures, fracture it, and weave a new, radically different safety net.