In Valencia, in general, everything is pretty much under control given the exceptional health situation in which we are living and a State of Alarm, which is truly unprecedented in the history of Spanish democracy. The media has disclosed that the virus could have entered Spain from 15 distinct points, according to the analysis of mutations in the genome sequencing of different strains of the virus that researchers have carried out, and could have been present in the country as early as February, undetected.

The situation in Spain is that of a decelerating rate of infection and, almost daily, a reduction of Covid-19 related deaths, but even though we are overcoming an extreme situation, we cannot forget that the coronavirus has dealt a merciless blow to Madrid (7577 deaths) and Catalonia (4247 deaths). Spanish health workers have faced the pandemic heroically, with severe shortages of personal protective equipment, resulting in one of the highest rates of infection and mortality in the global healthcare community. Donations of supplies from China during the first weeks of the epidemic and the huge purchases made by the Spanish government have mitigated the situation, but I believe that there is still severe shortages and quality problems and many products have been recalled: defective masks, unusable reagents for completing the tests, etc.

In fact, an aunt of mine is a nurse in Andalusia and regularly tests patients which are suspect of having coronavirus, protected only with a surgical mask. I was able to send her a package of N95 masks recently, as soon as they arrived by mail (from China). 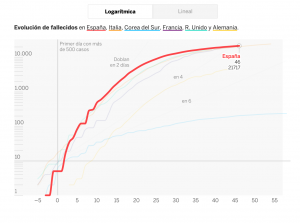 Workers from non-essential companies went back to work on the 20th of April (with mandatory usage of masks while keeping a distance of 2 meters, including on public transport) and the government has announced a gradual plan to deescalate confinement, which will vary according to the different cities and autonomous communities. Children younger than 14 years old will be allowed to walk with their parents starting on the 27th of April, always following sanitary measures (at first, the government announced this measure for kids younger than 12, but had to backtrack their decision that same day after a public outburst of indignation). We will have to wait and see if this gradual deescalation of confinement will lead to new outbreaks and, if that were the case, the government has already announced stricter measures.

In Valencia, as of today, there are 10,538 infections, 5011 people cured, and 1106 deaths from the virus, which are chilling statistics because on April 11, Las Provincias, (a regional newspaper) reported that 28% of all deaths in the city of Valencia were due to the coronavirus. The ICUs of most hospitals, including the zones most affected, are no longer so overwhelmed. Field hospitals were set up in Valencia in anticipation of a larger outbreak, just like they were mounted in Madrid and Barcelona, but being less of a metropolis, things have turned out better. What I gather from conversations with friends who work in hospitals or have contact with hospitals is that there were some critical moments a couple of weeks ago, but now everything seems to be under control.

The government has offered economic support to companies that have requested a temporary employment regulation as a result of the impact of SARS-CoV2 (this has helped to prevent uncontrollably rising unemployment numbers) and have voiced their compromise to offer a “minimum vital income” to all citizens during the crisis, but the help has not yet been distributed. Whatever the case, despite the precariousness of the Spanish labor market since 2008 and the impoverishment of the pension system, the Spanish social security still has a pretty solid system of protection for workers, providing, for instance, unemployment checks for workers out of a job (or those who have worked abroad and have no right to an unemployment subsidy), not to mention intrafamilial solidarity, which has kept many families afloat (owing to the stable pensions of the elderly).

In general, the supply chain works with normality (right now we can only buy basic products in person, and the remaining products over the internet, with the option of picking them up in person). A price cap has been placed on surgical masks and sanitizing gels, which for the most part should be available in pharmacies in the coming weeks, starting with those belonging to higher risk groups.