What have you been doing/working on most recently?

I’m working on a project now that I call Melt/Rise, which is a transnational study of adaptation to changing hydrospheres (oceans and sea level rise) and cryospheres (melting ice in the Arctic and elsewhere). This research is about ice becoming ocean and how that may be creating new connectivities between us. As cryospheres melt, becoming part of a larger hydrosphere—the world ocean—new links are also created between otherwise distant places and peoples. In this project, I look at how melting ice, now transformed into rising seas, is potentially binding us together in novel ways across continents, and over time. By looking at adaptation to the twinned phenomena of melting ice and rising seas, I explore a concept that I call hydrological globalization: a new form of global connectivity in the wake of anthropogenic environmental impacts.

Designed around a new model developed by NASA physicists, the Gradient Fingerprint Map and grounded in the methods of social science, in this project I explore hydrological adaptation between specific locations of melting ice and rising seas. It is, in one sense, rocket science meets social science.

What career accomplishment are you proudest of?

I am proud of the more conventional things I’ve done, like teaching and writing. But I am also happy about the directions I’ve been able to take in my research which is now entirely devoted to undoing the climate crisis with a focus on just transitions and environmental justice. Recently, a project I initiated (based out of my research in Iceland), received media attention all over the world, appearing in about 10,000 news outlets including The New York Times, The Guardian, The Washington Post, Time and CNN. It was a memorial to the first major Icelandic glacier lost to climate change, Okjökull.

How were you inspired to focus on adaption responses to the climate crisis?

My work in Mexico was focused on climate change “mitigation” —essentially the ways we can reduce greenhouse gas emissions  through measures like installing wind parks, solar arrays and emissions reductions policies. My research in the Arctic and coastal cities is focused on the other side of responses to climate change: “adaptation” to the effects that have already occurred and will continue to occur into the future over the next decades and centuries, as we must now reconfigure ourselves, our infrastructures and our policy regimes to deal with the effects of anthropogenic (human-caused) climatological impacts.

Check out this blurb from Cymene’s book, Ecologics: Wind and Power in the Anthropocene  to learn more about her research! 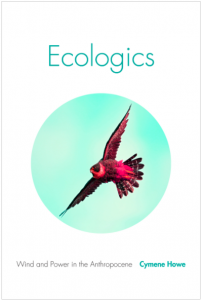 In Ecologics Cymene Howe narrates how an antidote to the Anthropocene became both failure and success. Tracking the development of what would have been Latin America’s largest wind park, Howe documents indigenous people’s resistance to the project and the political and corporate climate that derailed its renewable energy potential. Using feminist and more-than-human theories, Howe demonstrates how the dynamics of energy and environment cannot be captured without understanding how human aspirations for energy articulate with nonhuman beings, technomaterial objects, and the geophysical forces that are at the heart of wind and power.

What is the most difficult aspect of your research?

There is rarely good news when it comes to climate change; the story is almost never: “oh, look, the species we thought were going extinct no longer are!” or “we are on track to cut our emissions to the levels they need to be!”. That can be a hard space to be in all the time, hoping for positive changes and seeing some, but very few in the aggregate. The optimist in me keeps working though, trying to do my part when and where I can.

Please join us for Professor Howe’s lecture entitled, “Renewable Energy and More-than-Human Worlds: A Case Study in Mexico” on Tuesday, 11/17 @ 12:30. You can join us HERE.