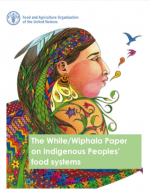 LACIS’ Honorary Fellow, Olga Lucia Chaparro Africano has contributed to this important document (The White Wiphala paper Indigenous Peoples Food Systems) which was prepared by the World Center for Food Systems of Indigenous Peoples of FAO, in collaboration with a large group of researchers.  Contributions were made from the food systems of the indigenous peoples of the Amazon region and the challenges they face, which were integrated into the document, whose objective is to support the United Nations Food Systems Summit that will be held soon.

Here is a summary of some of the content that you will find in it:

The document is not yet available on the FAO platform, however, the contributors have been invited to disclose this document in advance, so that it can be a tool for decision-making and the generation of public policies within the framework of the debates, both on the part of indigenous peoples, decision-makers, researchers, academia, and the public interested.

The Spanish, English and French versions will soon be available for consultation directly on the official FAO portal.