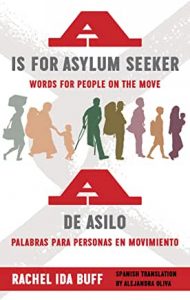 As millions are forced to leave their nations of origin as a result of political, economic, and environmental peril, rising racism and xenophobia have led to increasingly harsh policies. A mass-mediated political circus obscures both histories of migration and longstanding definitions of words for people on the move, fomenting widespread linguistic confusion. Under this circus tent, there is no regard for history, legal advocacy, or jurisprudence. Yet in a world where the differences between “undocumented migrant” and “asylum seeker” can mean life or death, words have weighty consequences.

A timely antidote to this circus, A is for Asylum Seeker: Words for People on the Move / A de Asilo: Palabras para Personas en Movimiento. Written to correct the de-meaning of terms by rhetoric and policies based on dehumanization and profitable incarceration, this glossary provides an intersectional and historically grounded consideration of the words deployed in enflamed debate. Skipping some letters of the alphabet while repeating others, thirty terms cover everything from Asylum-seeker to Zero Tolerance Policy. Each entry begins with a contemporary or historical story for illustration and then proceeds to discuss the language politics of the word. The book balances terms affected by current political debates—such as “migrant,” “refugee,” and “illegal alien”—and terms that offer historical context to these controversies, such as “fugitive,” “unhoused,” and “vagrant.”

Rendered in both English and Spanish, this book offers a unique perspective on the journeys, histories, challenges, and aspirations of people on the move. Enhancing the book’s utility as an educational and organizing resource, the author provides a list of works for further reading as well as a directory of immigration-advocacy organizations throughout the United States.

Praise for A Is For Asylum Seeker:

This is just the book we need right now. It will draw you in and hold you, from the first word to the last. It is so much more than a historical glossary. It is a reminder that words have power. They create the world around us. Each word in this book is an offering, a reclamation, a seed of liberation.

Words matter. Political conflict often drives changes in their meaning. In this brilliant work of activist scholarship Rachel Buff provides a primer on the changing meanings of words shaping today’s debates. Advocates for a new vocabulary supporting the human right to move more freely will want to build on her firm foundation.

An essential primer for the era of forced migration, militarized borders, detention centers and for-profit carceral systems. Rachel Ida Buff’s profound, readable new book is filled with clarity, context and critical guidance for all who ‘dream in the many languages of liberation.’

— Rabbi Brant Rosen, Wrestling in the Daylight: A Rabbi’s Path to Palestinian Solidarity

A unique and stimulating perspective on the intersectional journeys, histories, challenges and aspirations of different types of migrants in the world, with an emphasis on the United States. This book uplifts the fundamental humanity at the core of the migrant experience regardless of nationality, religion, race, or economic purpose.

Rachel Ida Buff’s A is for Asylum Seeker is a marvelously conceived, highly relevant, and eminently readable abecedary that confronts our growing inability to recognize the humanity of people forcibly displaced from their homes. In this book, Buff is not only exploring the lexicon of displacement but is also building a language of resistance to the dehumanization of migrants worldwide, and that itself is a feat almost beyond mere words.

— Moustafa Bayoumi, How Does It Feel To Be a Problem? Being Young and Arab in America