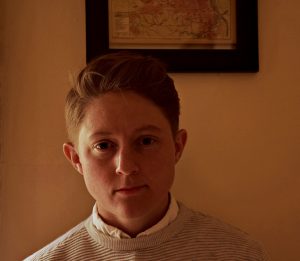 Emi Frerichs is a Ph.D. Candidate at the University of Wisconsin-Madison in Latin American Literature within the Department of Spanish and Portuguese, currently writing their doctoral dissertation entitled, “Towards a Travesti Subjectivity and System of Aesthetics: Approaching Trans*lations in Latin American Literature, Film and Culture.” Originally from Iowa, they studied and received their BA in Spanish at the University of Iowa as a Matthew Shepard scholar in 2010, and subsequently received their MA in Spanish Language and Literature in 2013 at the University of Wisconsin- Madison. Having been a longtime queer activist, Emi’s interests include most centrally travesti and trans* bodies and personhood in resistance to hegemonic, heteronormative systems as portrayed through characters, both real and imagined, in Latin American narrative, film and culture. Through careful historical, cultural, and linguistic examinations, their work looks to disrupt the problematic projection of Globally Northern to Globally Southern understanding that perpetuates the notion of Western queerness and trans*ness as the ultimate liberation saga and situates their understanding at the praxis of travesti knowledge and existence. By delving deeper into various territories (Argentina, Chile, México, Cuba, Puerto Rico) with distinct iterations of queer/cuir/cuyr and travesti/trans*/transexual/transgénero existence, their work looks to continue contributing to a constant undoing of these problematic and neo-colonial approaches, providing pertinent archival information that considers unique expressions of terminology that often times directly refuse translation.