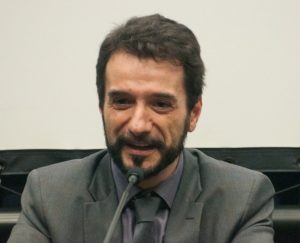 Giampaolo Molisina is a Ph.D. student in Italian at UW-Madison. Born in Rome, he earned his B.A. in Italian Language and Culture from Università di Pisa and his M.A. in Didactics of Italian Literature from Università per Stranieri di Siena. As lecturer, he taught comparative literature and cinema courses at the Universidad del Pacífico in Lima, Peru, and worked as Didactic Coordinator of the Italian language courses at the Italian Cultural Institute of Lima. His research interests include post-war Italian political cinema and literature, comparative literature, and critical and theoretical intersections between Italian and Latin American literature and cinema, with a special focus on experimental cinematic and literary works of the twentieth century.