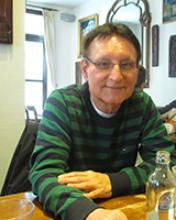 Professor Albuquerque teaches graduate and undergraduate courses in Portuguese language and Brazilian literature and culture. His main area of research is contemporary Brazilian theatre. Author of Violent Acts: A Study of Contemporary Latin American Theatre (1991); Tentative Transgressions: Homosexuality, AIDS and the Theater in Brazil (2004); and co-author of the revised edition of Português para principiantes (1993). Professor Albuquerque edited the volume Joaquim Nabuco: Conferências nos Estados Unidos – Nabuco e Wisconsin (2010) and co-edited the critical anthology, Performing Brazil: Essays on Identity, Culture and the Performing Arts (2015). He has also published numerous articles in journals and critical anthologies. He is a co-editor of the Luso-Brazilian Review; Brazilian literature (drama) editor for the Handbook of Latin American Studies, Library of Congress; and an editorial board member of Hispania and the Latin American Theatre Review. He is a member of the Executive Committee of the American Portuguese Studies Association (2012-2016). Professor Albuquerque served as director of the Latin American, Caribbean and Iberian Studies Program from 2002 until 2004 and in 2002 he received a University of Wisconsin’s Chancellor’s Distinguished Teaching Award. Professor Albuquerque’s book,Tentative Transgressions has received the 2005 Roberto Reis Award of the Brazilian Studies Association (for best book on Brazil published in English between 2003 and 2005) and the 2008 Elizabeth Steinberg Award for best book published by the University of Wisconsin Press between 2003 and 2008.