“Culture” is a dynamic concept that is continually evolving.  In many communities around the world globalization has increased the rate at which cultural practices, traditions, and objects are changing. This is why, to many communities, the preservation of their material culture and traditions is important. Masters of Science Candidate, Carolyn Jenkinson, spent time in Oaxaca, Mexico to learn more about a traditional women’s garment, called a huipil, and its importance in the communities that make them. After working with weavers and gathering more information about this important tradition, she brought it back here to Madison to share in her master’s thesis exhibition, “Ancient Looms, Modern Threads: Contemporary Handwoven Garments of Oaxaca, Mexico.”

Huipiles are pre-Colombian, hand-woven garments that often act as identity markers for indigenous communities. The styles vary from group to group and usually contain different symbols and designs with various meanings that are specific to each group. In the exhibition three different indigenous groups are profiled: The Triqui, the Amuzgo and the Ikoot. Within the exhibition, one is able to see first-hand the way these garments have materially changed over time, while still maintaining much of their symbolism and keeping the cultural practice of weaving relevant in their communities. 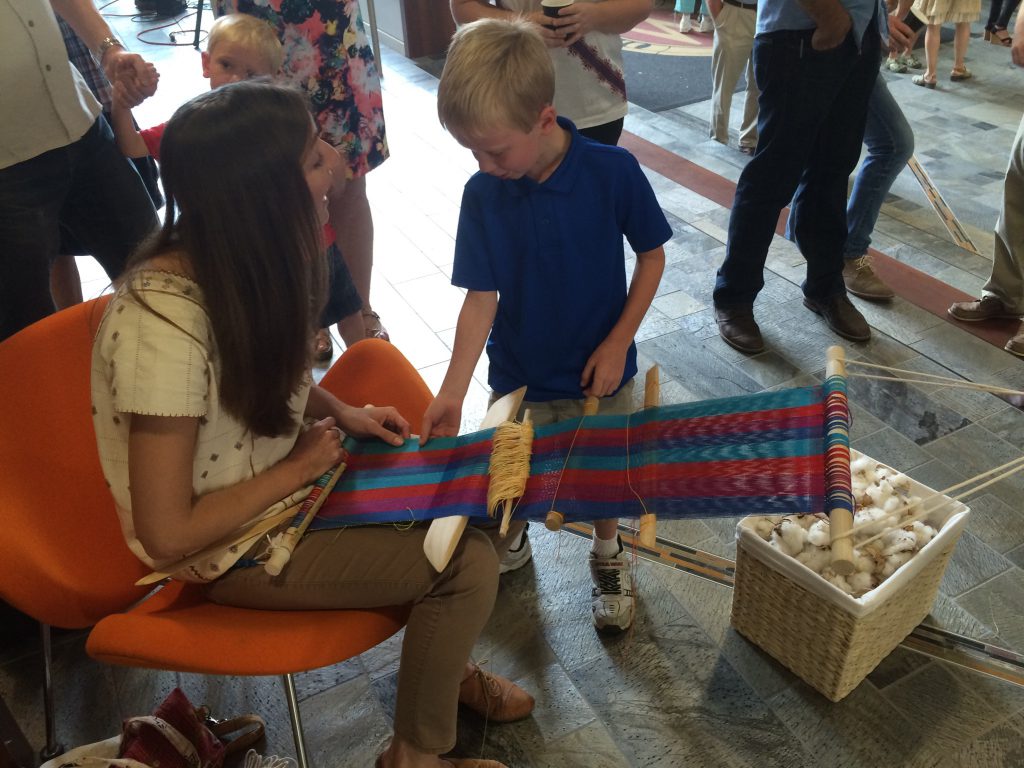 On Saturday July 30th a Oaxacan-style community celebration took place in conjunction with the exhibition. Not only did they have food, music, and activities, but a blouse style huipiles were sold, made-to-order, in partnership with Wisconsin Without Borders. According to Director Sherry Harlacher attendance was great; around 210 people attended the event. Sherry stated that “people started showing up right away and some had never eaten tamales before! Sherry added that Wisconsin Without Borders sold 12 huipiles, two more than they hoped for so the sale was a huge success. 100% of these proceed went to weavers and their communities in Oaxaca, Mexico. Carolyn Jenkinson said that she was “pleased to see how interested people were in the weaving demonstrations. Lots of people came right over and stayed by my loom, asking in depth questions about the technology and techniques. Once they began to understand the mechanics of weaving on the backstrap loom, many people really seemed to reflect on the complicated designs they had seen in the exhibit with a new sense of appreciation. So I think the demonstrations were successful in reinforcing the technical sophistication and labor-intensive nature of weaving huipiles.”

Selling these traditional garments here in Madison not only empowered the weavers and strengthened their cultural identity, but also helped educate the Madison community on the history behind the huipiles and their cultural significance. “These cultures and objects are continually changing,” Jenkinson stated, “it’s important to continue to share that story.”