I had the pleasure of interviewing Jonatas Chimen one of our successful LACIS alumni. Jonatas is a Brazilian-American Symbolist painter, sculptor, performance artist, writer, and lecturer. Along with holding a Bachelor of Arts degree in Latin American, Caribbean, and Iberian Studies from UW-Madison, he acquired a Master of Fine Arts degree from Florida International University. In addition Chimen has instructed and lectured at the Art Institute of Weston and at the University of Wisconsin-Madison. His work explores personal and collective identity amidst a complicated and ever-changing cultural landscape. The artist’s exploration of identity is often drawn from his own family’s history of immigration. Seeing all the great things Jonatas has accomplished we decided to check in and see what new exciting things he is doing.

When did you graduate from UW-Madison? What degree/s?

I graduated from the University of Wisconsin-Madison in 2012 with a Bachelor’s degree in Latin American, Caribbean, and Iberian Studies (LACIS).

What are you currently doing/working on?

Currently I am working on several different jobs with the goal of calling attention to the importance of art in society. I am actively making the point that contemporary artists must be well-rounded, professional, and incredibly ready individuals, whose works must challenge the status-quo and bring about reflection in society. Towards that goal, I currently am teaching two courses on art and art history, I hold the position of leading artist at Immersive Art Miami (through which we create art exhibits, cultural programs, and community partnerships), and I hold the position of co-editor of the Journal of Spanish, Portuguese, and Italian Crypto-Jews – a peer-reviewed academic journal published annually by the School of International and Public Affairs at Florida International University. I also am a professional artist, whose collections keep on expanding and getting exposure locally, nationally, and internationally. My latest piece, a large-scale installation titled In Thy Tent I Dwell, has become a book and is scheduled to appear in Paris and Berlin in 2017. 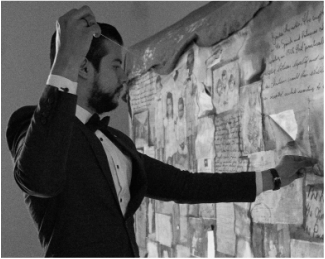 Can you talk more about your course “Immigration, Hybridization & The Spanish Inquisition”?

The course which I developed for Florida International University is an interdisciplinary course which offers a rare glimpse into the history of a Spanish and Portuguese religious minority known as Sephardim. To tell their story, I use the visual arts as a catalyst to an otherwise impalpable narrative. The course focuses on the periods between the 15th century and today, when the Hebrew people of Spain and Portugal were expelled, martyred, and forcibly converted by the Holy Inquisition. As a goal, I pay special attention to the highly-nuanced culture of their contemporary descendants, historically known as crypto-Jews, Marranos, Conversos, Gente da Nação, New-Christians, or B’nei Anusim, who to this day are an identifiable but obscure community in the Iberian Peninsula, Latin America, Southwest U.S.A, and South Florida. Through this, I aim to emphasize the role of art as an important vehicle for individual expression, identity protection, and the preservation of memory. Thus, by investigating the works of the Old Masters (some of whom are descendants of Iberian Jews), such as Velasquez, Goya, Rembrandt, Pissaro, along with the works of contemporary artists, we explore, deconstruct, and better understand the complexity of identity.

Students greatly benefit from this course by developing a greater understanding of the hybridization of culture, religion, language, and ethnicity (illustrated through DNA sampling, among other methods), a reality in our globalized world, specially common among migratory communities, such as those found here in the U.S. Not only that, but through this course, students engage in conversations that enrich their appreciation for the arts, by increasing their individual artistic discernment (through theory, interpretation, and vocabulary development). Finally, and perhaps most importantly, students engage in a highly interdisciplinary academic approach, a modern concept which aims to place the arts amongst other crucial disciplines, changing the perception from the old STEM concept to the new STEAM idea, which understands that groundbreaking thinking comes from the mingling of the Sciences, Technology, Engineering, the Arts, and Mathematics.

What inspired your interest for art? What about it makes you so passionate?

Art to me is a language. I do not mean to sound so cliché, but I indeed see art as a universal human language capable of defying barriers, prejudices, stigmas, and able to build bridges between individuals who would otherwise never engage in a social exchange. Art’s depth is found in its capacity to ask relevant questions and to bring about self-reflection. Once I realized that art could take an interdisciplinary form, I knew that I wanted to be a professional artist. There are simply too many fascinating subjects to study, too many layers of the human experience to uncover, and too many philosophical questions to investigate. As a serious artist, I can tackle each of these elements systematically, one-by-one, through a constant engagement with a number of captivating subjects and processes. I am passionate about developing entire collections dedicated to one subject or narrative at a time, and I am even more passionate about engaging with the public to explore the many viewpoints that a work of art might touch upon. The dynamics of investigating, creating, exhibiting, and critiquing artworks (of my own authorship or by another artist) is a major source of my passion for art. 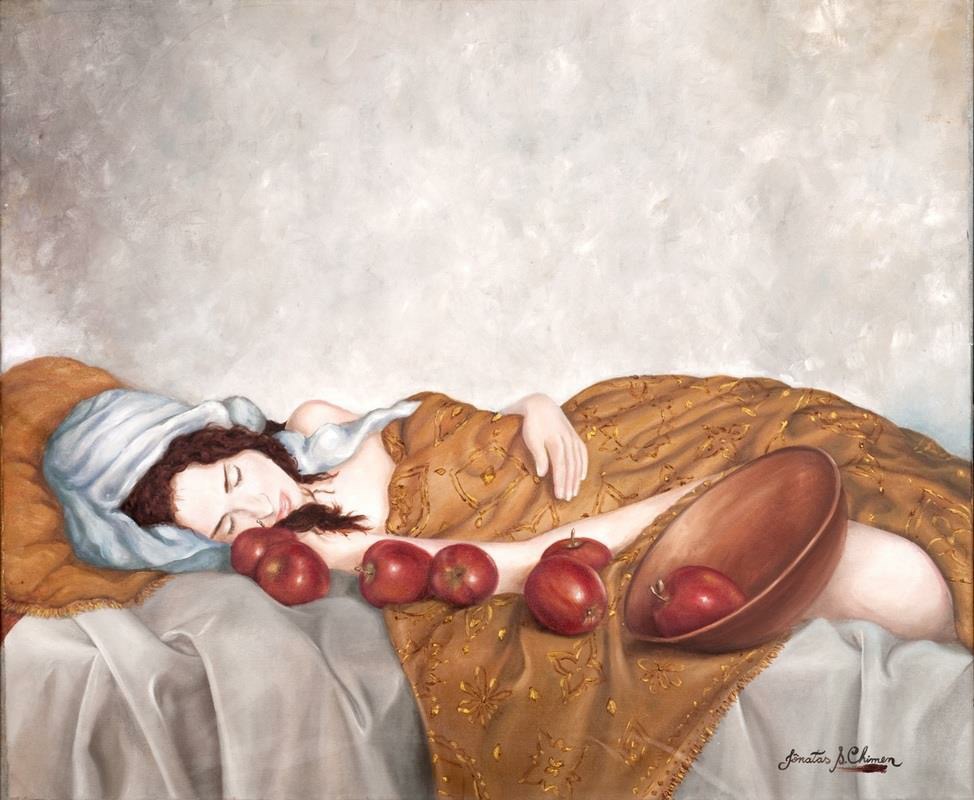 What are you most proud of? (career-wise)

Career-wise I am most proud to have received the title of Artist of the Year by the Anti-Defamation League in 2015. It was an honor to know that my Journey Collection truly embodied the utmost important mission of this century-old institution, which is to protect, defend, and embrace individual identity against prejudice and hatred. I am also incredibly proud to have been shown at prestigious U.S. museums, and now, to be receiving artistic representations in Europe (Paris and Berlin, so far). I remember when I first started as an artist over 20 years ago, and what is happening right now seemed only like a distant dream. I am very proud, thankful, and humbled, by all the opportunities I have been given lately.

What was your experience with LACIS?

My experience with LACIS was one of positive intellectual challenge and constant discovery. As a student, I was embraced by a supporting faculty – including Sarah Ripp, the most incredible academic advisor I have ever had the honor to come across – and a curriculum that was broad enough to allow me to make individualized academic choices, based on what I thought was relevant for my career goals. During my LACIS degree-work I acquired Spanish fluency, I became better versed with Iberian history and literature, and I was given plenty of opportunities to create artwork related to my coursework, and to participate in events which dealt with the Latin American migrant experience. One such event was a visual representation by students of the book titled Enrique’s Journey, for which I sat on the committee.

How did LACIS prepare you to get to the place where you currently are?

LACIS prepared me to face the academic and artistic worlds from a scholarly angle. It was only through LACIS that I learned how multifaceted Latin American and Iberian identities truly are. Because the LACIS degree is so flexible and broad, I was frequently able to tailor it towards my academic research and my artistic practice, often both at the same time. When I joined the Masters of Fine Arts program at Florida International University, all of my work was done through the prism of LACIS, due to my own personal interests. In addition, having a LACIS degree gave me the expertise and credibility to publish research on Latin American, Caribbean, and Iberian issues, and so, my appointment as the co-editor of the Journal of Spanish, Portuguese, and Italian Crypto-Jews is directly linked to my LACIS degree.

Do you have any advice for our current LACIS undergraduate students?

My best advice is for LACIS students to think critically and broadly about their career goals. For example, since graduating with a LACIS degree I encountered opportunities to do legal and literary translations, I had the opportunity to attend Law school, I graduated with a Masters in Fine Arts, and I was hired as a professor to develop and teach an interdisciplinary course (dealing mostly with art and Latin American/Iberian history) at Florida International University. All of this happened within less than 5 years after I graduated from UW-Madison with a LACIS degree. As Latin American social-political issues assume greater importance within the North American cosmos, there will be a greater demand for LACIS-minded individuals. This is already happening in the conceptual art world, which is heavily reliant on theory, research, and historical revisionism (Latin American identity is a hot topic, unsurprisingly so), and it will continue to happen through other industries and professional spheres. If you choose to attend graduate school, LACIS is perhaps the best degree to hold, especially for those who wish to enroll in an M.B.A., M.F.A., or Law school program. Overall, I advise LACIS students to reach out to their professors and advisers, since they are some of the most qualified scholars around, whose sole goal is to guide and place you among the best in industry or academia. It is largely due to the guidance of Professor Severino Albuquerque and Academic Advisor Sarah Ripp that I arrived where I am today, and for that I will always be grateful.