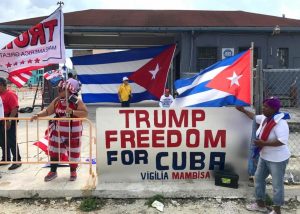 On Friday, President Trump announced in front of a crowd gathered in Miami’s Little Havana that he was “canceling the last administration’s completely one-sided deal with Cuba.” His policy’s goal, he explained, is to spark political change on the socialist island.  The policy aims to do so by weakening the Cuban state — depriving Cuban military, security and intelligence forces of U.S. dollars — and instead empowering ordinary Cubans by funneling these dollars to their small-scale private businesses.

But Trump’s newly announced Cuba policy is likely to have just the opposite effect. Small business owners in Cuba — and U.S. businesses — will almost certainly suffer the most. And the Cuban state will become even stronger.

For all the talk of “canceling the last administration’s one-sided deal with Cuba,” Trump’s Cuba policy leaves in place most of the measures that President Obama introduced.

Embassies in both countries will remain open. Direct commercial flights and cruises from the U.S. will still operate. Travelers will still be able to spend unlimited amounts of money on the island and can still bring back Cuban rum and cigars to the United States. Americans will continue to be free to send unlimited amounts of money to Cubans on the island. The “wet-foot, dry-foot” policy that Obama eliminated will not be reintroduced. Bilateral agreements penned on issues such as combating drug trafficking and mitigating oil spills will remain in place. The economic embargo on Cuba, which Obama was unable to repeal by executive order because it requires a vote in Senate, also remains in place.

Americans (or, more precisely, “persons subject to U.S. jurisdiction”) wishing to travel to or do business with Cuba will now face much tighter restrictions.

Even under Obama, visiting Cuba purely for tourism wasn’t permitted. Travelers were supposed to qualify under one of 12 categories of authorized travel (journalistic activities, professional meetings or research, religious activities, etc.) and to keep records (for at least five years) of a full-time schedule related to the category. But under Obama, this ran on the honor system. Travelers self-declared their travel category, and no one closely policed compliance. That will change. According to Trump’s presidential memorandum, the 12 categories of authorized travel will be more stringently enforced and travel to Cuba will be regularly audited to ensure compliance.

Most of the 12 categories of authorized Cuba travel are quite narrow, meaning most Americans don’t qualify. However, there’s one broad category: “people-to-people” travel, under the educational activities category. Americans had been using this category to travel to Cuba even before Obama changed the rules in late 2014, but they had to use a licensed group tour company with a set itinerary and a guide.

Under Obama, ordinary Americans could plan their own itineraries, as long as they would engage in “meaningful interaction” with Cubans in ways that “enhance contact with the Cuban people, support civil society in Cuba, or promote the Cuban people’s independence from Cuban authorities.”

Trump’s Cuba policy again prohibits individual Americans from traveling to Cuba under this broad “people-to-people” category. Once again, Americans must travel through a licensed tour company under U.S. jurisdiction and be accompanied by a company representative. Cuban Americans and others who fit the more narrow categories will still be allowed to travel on their own.

Individuals who had made travel arrangements before Trump’s announcement Friday are allowed to complete their trip under the “people-to-people” category. But for the vast majority of Americans, individual travel to Cuba will now be closed, despite what Sen. Marco Rubio would have you believe.

[So Congress is challenging the president about sanctions. That has a long history.]

In another major break from Obama policy, travelers or people who wish to do business with Cuba will face restrictions on how and where they can spend U.S. dollars on the island. Within 30 days, the secretary of state will begin to compile a list of forbidden Cuban entities, including hotels and other businesses that are “under the control of, or act for or on behalf of, the Cuban military, intelligence, or security services or personnel … its affiliates, subsidiaries, and successors.”

The changes will go into effect once the secretaries of Treasury and Commerce issue specific regulations, a process that will probably take months.

How will these changes affect Cuban people and U.S. businesses?

Restricting individual travel to the island — and forcing travelers to stay in supervised groups — will directly harm the Cuban people. This is because individual travelers are more likely to stay in small bed-and-breakfasts, get around town in private taxis and dine in private restaurants. These small businesses, however, don’t have the capacity to accommodate large tour groups.

Sizable tour groups will need to continue to stay in hotels (all state-owned) and get around in tour buses (again, state-owned). Trump’s policy allows travelers to patronize nonmilitary state businesses, yet the military’s “tentacles reach deep.” The military dominates the tourism sector, leaving few alternatives for travelers. In fact, Rubio recently warned that two major hotel chains that are ostensibly civilian-run are actually run by the military.

The result will be that fewer American travelers visit Cuba. Dampened tourism will starve small, tourist-oriented business owners, who in turn won’t have the purchasing power to buy from other small entrepreneurs who serve the domestic market, creating a negative economic ripple effect.

The prohibition on individual travel will also hurt U.S. commercial airlines and cruise companies. Other U.S. businesses eager to enter the Cuban market will suffer due to the new restrictions on financial transactions with military-run or affiliated entities, which are reported to control 40 to 60 percent of foreign exchange earnings.

So why is a businessman and self-proclaimed master negotiator like Trump pursuing a deal with Cuba that will harm rather than help businesses, both on the island and at home?

Because of politics, not business. Trump is making good on a campaign promise to a small but economically and politically powerful group of anti-Castro Cuban Americans concentrated in Florida, a state that often decides the outcome of presidential elections and which Trump won in the 2016 general election. He might also be rewarding hard-line Cuban American members of Congress who voted to repeal Obama’s Affordable Care Act and replace it with Trump’s American Health Care Act. That would include Rubio and Rep. Mario Díaz-Balart, vocal critics of the Castro government who were instrumental in drafting Trump’s policy toward Cuba.

The Cuban state considers itself a model for other small nations fighting the war against imperialism, firmly and proudly holding its ground in the David-and-Goliath battle over its sovereign future. It is not likely to capitulate now.

[Obama’s symbolic visit to Cuba is the exception. What’s the real history of presidents and international travel?]

Cubans blame U.S. restrictions on Cuba — the economic embargo in particular — for the country’s weak economy and low living standards. They call the embargo a “blockade,” and billboards and state media reinforce the message that the blockade is “genocidal.”

Trump’s Cuba policy is likely to be perceived by Cubans as the latest incident in a long history of U.S. aggression against the island, whose ultimate victims have been the Cuban people. Rather than weaken the state apparatus, these restrictions will probably bolster support for the Cuban state by its international allies and among its own citizens.

Meanwhile, the United States will lose credibility for imposing restrictions on its own citizens in the “land of the free.”

Martina Kunović is a PhD candidate in the department of sociology at the University of Wisconsin-Madison and was a visiting researcher at the Instituto Cubano de Investigación Cultural Juan Marinello in Havana in 2015-16. Her dissertation project examines Cuba’s changing economy through the lens of housing and the budding real estate market.