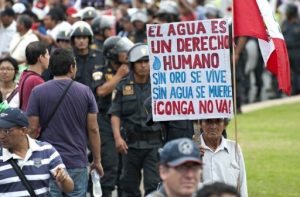 Written by Gillian Quinn and edited by Margarita Orozco

Water scarcity in Latin America may sound like a paradoxical phrase. The region contains a third of the planets water and is home to four of the world’s 25 biggest rivers, including the Amazon. However, Latin America has considerable inequalities when it comes to water due to both man and nature.

These issues have inspired Paul Block, an assistant professor in the School of Civil and Environmental Engineering at UW-Madison, to dedicate his research to developing strategies that promote a more efficient use of water resources.

Latin America geographically has an unequal distribution of water; some areas are extraordinarily water-rich, others are very dry, and some have 80% of their rain concentrated in just a few months of the year. This can cause water shortages at certain times of the year and limit the development of irrigated agriculture, industry, mining, production of hydroelectric power and cause conflicts between sectors due to competition for the resource.

Paul Block referenced the Wisconsin Idea to explain why the School of Engineering at UW is concerned with water issues in Latin America. The philosophy essentially signifies that education should influence people’s lives beyond the boundaries of the classroom; it should have benefits for the state, the country and the world.

Professor Block’s research links together many disciplines such as climate science, economics, social science and engineering. He and his team are helping stakeholders to figure out ways in which they can wisely use the water resources they have.

According to Professor Block, water is a very local issue. An area may have a complete lack of water or they may have an economic insecurity of water, meaning they do not have the infrastructure to take advantage of their water resources.

One area where Paul Block and his team have been working is the semi-arid Elqui Valley in Chile. He noted that Chile moved towards water privatization as their method of allocating water in the 80’s. The Junta de Vigilancia, the Water Board, sets an allocation of water yearly depending on how much is in the reservoir and how much is expected to come in.

Professor Block explained that the privatization of water is a very controversial topic. Water is a common good and a necessity for life, so it can be difficult to advocate for restricting access to that resource. However, Chile’s system is not purely economic. The board has implemented protective measures to make sure the water isn’t going to one group of people. These work like insurance to reduce farmers’ vulnerability to climate variability.

Professor Block noted that the way a country handles water resources varies depending on geography, climate, infrastructure and GDP. Though Latin America inefficiently uses water in almost all aspects, the situation has improved in recent years thanks to problem-solvers like Paul Block and his team. Several countries have eliminated the obstacles that prevent water security and have promoted incentives of public policy necessary for an efficient use of the resource.

To hear more about Paul Block, his research and water scarcity in Latin America, click here.