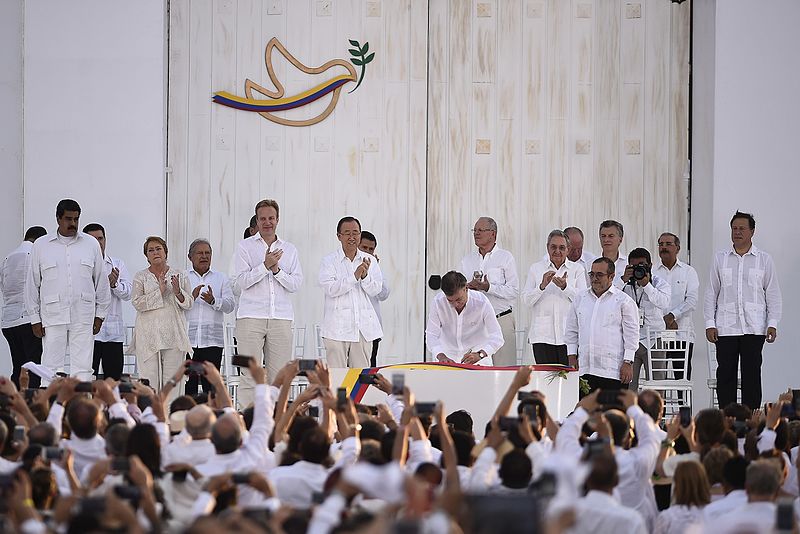 After a brutal 50-year conflict, resulting in the deaths of 177,307 civilians and the displacement of over 5 million people, Colombia’s path to peace is convoluted and painstakingly slow. The panel, ‘THE CHALLENGES OF MAKING PEACE IN COLOMBIA’ featured presenters who have dedicated their research to the issue of Colombian peace. Each presenter offered their own unique perspective on the issue of Colombia’s complex peace process and their own arguments to who the key players are. Roddy Brett, a professor in the School of International Relations at the University of St. Andrews presented on the role that victims of violence during the Colombian conflict in discussions of peace. Brett primarily referenced peace negotiations that took place in Havana in 2015 between the Colombian government and the FARC, in which 60 victims testified to the violence that they had endured. Brett argued that while the presence of the victims in the peace talks was problematic in certain aspects, as victims were politicized and threatened for their role in the talks, their testimonies placed victims at the center of the negotiating table, sparked acts of apology and acknowledgment, and paved the way not only for peace, but for justice.

The second panelist, Alexandra Huneeus, focused on the importance of the Jurisdicción Especial para la Paz (JEP), the transitional justice committee charged with investigating and punishing the perpetrators of violence in the conflict. According to Huneeus, the JEP is significant due to the diverse background of its 51 judges (53% women, 10% indigenous, 10% afro-Colombian, 61% from outside the capital) However, Huneeus argued that like the rest of the peace process, the JEP is flawed due to its lack of authority to punish the FARC and other perpetrators of violence. The JEP also struggles to balance power with other judiciary institutions such as the International Criminal Court: an institution that at any point in time could determine that Colombia is not satisfying its conditions for peace, and could open a case against the JEP. The JEP also struggles to balance power with the legislative powers of the Colombian Congress, and the overarching fact that the Congress passed the 2016 peace accord without the majority opinion of the public, who rejected the accord in the form of a plebiscite vote.

The third and final panelist was Pablo Rueda, a Tinker visiting professor. He focused on the role that indigenous organizations have played in Colombia’s path to peace. He explained how the displacement of indigenous people during the armed conflict forced indigenous people to migrate and completely changed the layout of their land. He further argued that indigenous organizations were involved in the peace process for three primary reasons: to guarantee truth and reconciliation, to exercise justice over the perpetrators of violence and to reform the land that had been either destroyed or taken from them during the conflict. Indigenous groups have successfully negotiated throughout the peace process to secure them the right to protest, secure rules to political reform and education reform. According to Rueda, indigenous groups also furthered their involvement in the transitional justice process by promoting their own indigenous justices to the Truth Commission (Comisión de la Verdad and the tribunal (JEP), giving them a role larger than their own self-interests, and guaranteeing that their voices were heard throughout the transitional justice process.

Although the panelists centered on various aspects of the Colombian peace process, all three highlighted its complexity and the overall the lack of effectiveness to implement resolutions reached in the Havana negotiations into the country as a whole. A plebiscite vote to implement the peace resolutions narrowly failed to pass, showing a deep divide of the public. Additionally, despite the plebiscite failing, Congress revised and passed the resolutions without the support of the public, representing the “original sin of Colombian peace”.