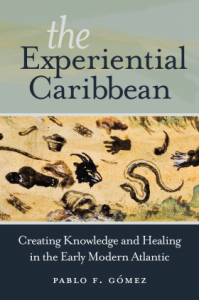 We spoke with the author of the award-winning book, The Experiential Caribbean: Creating Knowledge and Healing in the Early Modern Atlantic, PhD. Pablo F Gomez, who is an Associate Professor of the History of Medicine at the University of Wisconsin Madison.

This is Pablo’s first book that took many years to properly research and develop. His book was the product of research of his dissertation process and research over past years since he arrived at the University of Wisconsin Madison.

Gomez revealed he had been particularly interested in the gap in the history of how people of African descent conceive of their own world in the Caribbean, not only in terms of being on the receiving end of oppression, colonialism, and slavery but also as creators and enactor of their own world.  The book emerges out of questions relating to in what ways can we intervene and contribute to the historiography of the larger field of studies such as the history of science and other intersecting fields. Gomez wanted to make an intervention on several fields in a way that brings most of the history of the 17th century, like the scientific revolution. He was very interested in what else is happening in the world of the 17th century in where people were encountering each other, learning about people they had never met, and how did that change Africans specifically. Thus, it became a crucial part of his process of writing his book.

In history, Pablo related, one must let the evidence guide how you write. He says he was lucky that through his research process he was able to identify rich sources that spoke to him on the history that he found to be surprising and new- and he allowed historical actors in his sources tell him their stories.

Gomez explained that a lot of his research came from traveling to archives in Europe and Colombia and finding surviving documents from the Caribbean that were in different parts of Europe. All his sources were primary sources and he also used several published books of that era. It was a process that took many years since his dissertation making it a process of about 8 years.

At the UW he has taught courses on Caribbean Diaspora/ History of the Caribbean, social medicine, Health, Healing & Science etc., and before coming to the University of Wisconsin he taught courses in colonial history. Gomez tries to incorporate his research into his classes and tries to think with his students so he would work the arguments of his book into the class discussion. What he found was that there was a lack of books that talk in detail about some of the things such as disease in the 17th century the Caribbean that he discusses in his book.

He let the sources guide his work and his questions and often felt bounded by the empirical evidence. Professor Gomez says he still would love to learn more about the practices of these people, to get a better sense of their daily life and know more about the exchanges among the black communities since there is very limited information. He would also wish he had the opportunity to ask questions to find out what they thought of the politics in their day and would wish to see more record on the economics of days and how much they were charging and what exactly they were doing with the money they earned.

Throughout his research process he did feel surprised in the sense of the people’s profound intellectual engagement- specifically, he was surprised in finding out that these people were knowledgeable about things we didn’t usually think lane people were aware of, not only people of African descent but in general lane people.

When people talk about African descent it is usually in the slave context and the early modern world; however, Gomez wanted to highlight how those individuals they shaped colonialism, shaped modernity, shaped science. Often, they were referenced as laborers and slaves for the production of capital, and he wanted to approach this taking into consideration how in Europe and black capitals – places that were dominated by people of African descent and how different kinds of thinking, knowledge, and shaping of the world emerged.

Currently, his work is being influenced by a lot of his discoveries and interesting knowledge he uncovered while doing research for his first book. He is interested in exploring the ideation of quantifiable body in the 16th and 17th century in terms of how slave traders were the first people to come up with ideas that made people quantifiable and universal by attributing subjective value on gender, physical characteristics, height, weight, disease, etc.