Jonatas Chimen is our first ever annual distinguished LACIS Alumni in residence. Chimen has a BA degree in LACIS and found it very applicable to his artwork and journey.

Chimen is a Brazilian American artist whose art has been inspired by his background in terms of the migration patterns of his family and ancestors- as he remarks – his art was a representation of diaspora identities.

He even paralleled the rhetoric of American society on the current questioning and legality of citizenship by the president and the hate a fearful speech regarding the foreigner. He felt that this resurface the old fears that his family also underwent in their patterns of migration and how this influenced and led to identity suppression of his family – which is the truth of many other individuals and lineages.

Jonatas revealed that he was raised in a strict code of secrecy and ambiguity in terms of his heritage. He traced his lineage and patterns of migrations that his family had to undergo from Spain to Portugal, to Amsterdam, to Brazil, and finally to Miami.

The art that Jonatas creates, he claims, is an expression that results from the mixture and migratory patterns of his family. It was only until more recently that Jonatas want 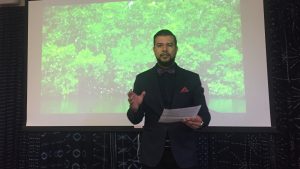 ed to give himself the task of learning more about his heritage and openly embracing it.

Through his learning and discovery – he decided that he wanted the Folklore and narratives of displacement which he saw as art, to be very prominent in his own art. His history taught him about the immigrant lifestyle and allowed him to view his family as pioneers, voyagers, and early settlers. Most importantly in his research, he became aware of how his family did not crumble in the process of their diaspora- and for that, the women are to thank.

Women were in charge of passing on narratives and traditions – and in turn, these traditions provided a sense of identity that could be hidden but never taken away because they were not tangible. The women, he said, were Donas – they commanded respect. Thus, he found that they were so integral to the survival of those traditions and identities that he decides to call them Madonnas – the holy immigrant women, and that is what his exhibit 5 Madonnas in exile is all about.

In his collection, he makes use of fabric as his paint. He was very particular and purposeful about his tools because he wanted to exemplify Marshal McLuhan’s idea of the medium being the message. Consequently, Chimen felt that thread was reminiscent of an individual and how alone it was insignificant- but as a collective and because of interweaving it became a strong fabric.

He wanted to show the importance of people coming together, and paint, he remarks, was not going to be able to convey that in the same way. He also used fabric because it was a type of female language- that is had often been considered a woman’s craft since women had been playing with fabric for such a long time through quilting and crocheting. He believed that we all share common goals – that what we are looking for is happiness, love, peace, companionship, and health.

The goal he mentions was not to create art that would be about him, but he found that every work of art is autobiographical and a self-portrait. If you are interested in learning more about Jonatas Chimen’s work visit his website http://www.theartofjonatas.com/ .

His exhibit on the 5 Madonna’s in exile is available until Friday, November 16th All day in Hillel Foundation – 611 Langdon St, Madison WI.

See a video about the exhibition here: https://youtu.be/S-QhPmeIMF4