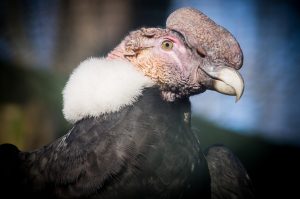 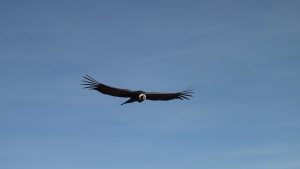 of a medium dog, the Condor is the largest flying bird in the world. For 100s of years, the birds have a documented relationship first with indigenous people in South America, to colonizers, to modern-day society. However, there is still very little information about the history of the population of the Condor and this information because more and more necessary as the species is under constant threat of extinction. In the lecture Application of Population Genetics in the Conservation Biology of the Andean Condor researcher Julián Padró, Postdoctoral Fellow of the Department of Forest and Wildlife Ecology at UW presents his extensive research on the Condor and how its findings 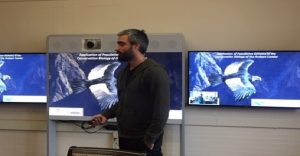 are necessary to efficiently repopulate the species.

Pre-colonialism, Condors were seen as a central symbol in daily life and were frequently depicted in the textiles, jewelry, and paintings of indigenous cultures. Now, however, the species is close to extinction. Padró explains that the Condor is particularly susceptible to extinction as it has an especially low reproductive rate: one egg every two years. Additionally, not only are the birds very easy to hunt due to their large size and slow speeds, but current colonial attitudes that emerged after colonizers arrived in Latin America, cause them to be actively persecuted. This persecution stems largely from the birds being seen as a threat to the beef industry. Farmers in the Southern Cone will even leave pesticide-laced carcasses as bait, in order to kill the birds. These threats are so severe that a species with a once abundant population throughout the continent are now endangered in Venezuela, Colombia, Peru, Ecuador, and Bolivia and has an estimated population of 6000, with the majority concentrated in Patagonia. Although conservation efforts have been somewhat effective, in the latest attempt to replenish the population that began in 1991, over half of the sample died, mostly due to poaching. According to Padró, there is a large lack of efficiency in conservation efforts because we do not know enough about Condor’s genetic diversity to best be able to breed them. The research attempts to solve this problem.

After a very thorough study, where Padró and his colleagues collected Condor feathers from four geographically distinct biomes and performed sexing, tested for genetic structure, and levels of genetic diversity, the researcher was able to successfully fill some of the gaps in Condor research in regards to the history of the species and the levels of genetic diversity in varying geographical regions. Among their main findings, were that there are two distinct genetic classes of Condors, one in the North and one in the South. However, one interesting finding was that regions closer in distance are oftentimes further in genetic diversity and Padró hypothesizes that this is because the Andean mountains, although seemingly challenging to cross, serve as “highways” for the birds since they require steep slopes to take off. In fact, flat plains can be risky for the birds to fly in. Padró asserts that this finding is important for conservation and that going forward, conservationists should prioritize protection in this area since this mountain “highway” is particularly necessary for the movement of the Condors.

Among other significant findings of the study were that the Condors have a relatively small “gene flow” of 1000km, meaning that in order to enhance the genetic pool, conservationists should focus on a neighboring area. They also found no evidence of inbreeding, a potential concern that had arisen out of past conservation efforts. Overall, Padró research fills the existing gaps in areas of genetic diversity and the history of the species that are necessary for developing a greater understanding of the species and furthering its conservation.