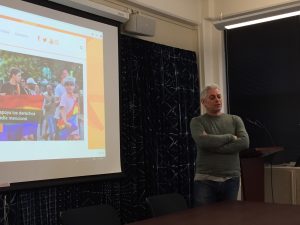 Since criminalization and repression under the Castro “regime”, Cuba has had a long and treacherous history in discrimination of the queer community. Now that Castro is dead the relationship is even more complicated as Cuba is living without their “father figure”, explains the Cuban queer activist Norge Espinosa. In addition to the repression of the LGBTQ+ community, Cuba, under the rule of Fidel Castro, also is defined by strict artistic repression and censorship. In his work as a queer activist, Espinosa compares queer repression to artistic and cultural repression to paint the nation’s history of one that is deeply-rooted in repression while increasing visibility for the community by using queer-inclusive symbols to imagine a new future for Cuba and one that accepts a group that is accepting of expression in the media, in government policy and overall.

One way in which the long history of discrimination in Cuba is starting to dissolve is by the reforming the Cuban Constitution in order to “re-imagine the Cuban future”, as Espinosa explains. These reforms are significant because while some aspects of the constitution have been changed since it was created by the Communist Party in 1976, for the most part, it remains the same. The constitutional reform includes the 68th decree, which would redefine marriage as a union between two people, rather than between a man and a woman, paving the way for gay marriage.

While some aspects of the constitutional reforms gave hope for a progressive future in Cuba, others are significant setbacks in censorship and are extremely upsetting for activists like Espinosa who are working for artistic expression for marginalized groups. One example of this is the controversial 349th decree in which, according to Amnesty International, all artists are prohibited from operating in public or private spaces without prior approval by the government. This new decree, which has been met with backlash by many Cubans, is yet another point in the history of Cuba’s long history of artistic repression, explains Espinosa.

Artistic repression in Cuba has existed since Fidel Castro rose to power. Norge Espinosa highlights Castro’s 1962 speech, “Palabras a los intulectuales” as one example in which Castro directly addresses academics, artists and other Cubans involved in the cultural scene regarding their concerns of censorship. Additionally, throughout Cuban history, cultural figures whose artistic expression has been considered pivotal to the development of Cuban countries were banned on national airwaves, or, such as Cuban singer Celia Cruz, were exiled from the country. These figures are central when thinking about Cuban culture, yet they are being censored by their own government. A newer cultural movement that has also face censorship from the Cuban government is reggaeton music. Reggaeton, often referred to as the “hip-hop” of the Spanish-speaking world, with crossovers into the culture of the United States through popular songs like “Despacito” and “Mi Gente”, is criticized by the government for its for being vulgar and indecent, as well as degrading women in the content of this lyrics. While reggaeton has a reputation of having offensive content, this is a large generalization to make about a complete genre of music that also has a history of empowering other marginalized groups, and regardless of content, is still censorship of a culturally significant art form.

Just like artistic repression, Cuba has a long and complex history of repression of the queer community. Since Castro rose to power, there has never been a public space for queer people to demonstrate, or even just to exist as openly gay individuals. The government also limits the media representation of the queer community within the country. This is shown in the popular film Santa y Andres, which takes place in 1983 tells the story of a gay writer who blacklisted by the government for both his sexual and ideological orientation. While the film received international accolades, it was banned in Cuba, representing the link between artistic repression and the repression of marginalized groups in the country.

Despite Cuba’s strict censorship of artistic mediums and their impact on marginalized communities such as the LGBT community, activists such as Norge Espinosa are currently advocating for a cultural shift. Espinosa admits that one challenge to the fight for a space for queer folks is that Cubans still are unable to comprehend the idea of gay marriage and families. Through media representation, Espinosa aims to change this. He has started many media campaigns through creative and accepting language hope to eventually gain acceptance from Cubans. While they still face repression from larger institutions such as the government and the Catholic Church, technology and social media make the proliferation of materials easier and the silencing of movements more difficult. Espinosa concludes his lecture by stating that while the queer community might not have space in Cuban society, they still exist, and despite the efforts of many, their voices, their stories and their representation in the media will not be stopped.