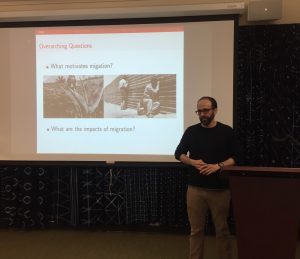 The decision for migrants to pick up their lives and leave the familiarity of their homes is never an easy one to understand. However, one of the most commonly justified reasons for migration is the search for a more-advanced, higher-paying job. In his research, Esteban Quiñones looks at the occupational outcomes of migrants based in Southern Mexico who are either currently working as well as those who have returned to their communities in order see if migrating increases labor opportunity. Using this data, he seeks to answer two main questions: what motivates migration and what are the impacts of migration on the migrants themselves, their families and their communities as well as the impacts on the larger political and economic history of states?

In order to answer both those questions, it is necessary to understand the political history of Central American migration. Quiñones highlights two political shifts that dramatically impacted Mexican migration. The first is an increase in trade liberalization and market integration in the 90s. A pointed example of this is the passing of NAFTA. The second shift was the implementation of public services that provided a sort of ‘safety net’ for its citizens. The most well-known example of this was the Progresa/Oportunidades conditional cash transfers in Mexico, which gave money to families based on certain actions that they took such as sending your kids to school or vaccinated family members. These programs were aimed at raising the human capital and incentivizing communities to do so. Both of these shifts impacted migration as well as labor outcomes for families. With the implementation of trade liberalization and conditional cash outcomes, communities saw their occupation options diversify dramatically, and were able to find higher-skilled labor.

Despite the increase of media attention surrounding migration into the United States through the Southern Border, international migration has decreased since the year 2000.

In his research, Quiñones dove deeper to looked at communities in Southern Mexico and how immigration affected the labor outcomes of both migrants in the communities and migrants who have returned. Quiñones admits that migration can certainly be a way to increase income, yet the effects are not so black-and-white. One aspect in which migration has impacted labor outcomes is in educational attainment as studies have shown that over time, migration has led to an increase in high school attainment, particularly for women. Another is through the remittances that migrants send back to their families. When investigating a community in Southern Mexico where the primary export is coffee, Quiñones found that 36% of families received remittances, and remittances accounted for 41% of household income. Coffee, on the other hand, was produced by 96% of households but only accounted for 19% of income.

It is clear that remittances can improve the economic situation of a migrant family, but it doesn’t determine if the occupational situation of those migrants have improved. In order to determine this, Quiñones analyzed the occupations of all people in the area and those that had migrated elsewhere. He then split the demographics of the community into two groups to compare: migrants and those that had never migrated to previous migrants who have returned to their communities and people that had never migrated. Finally, Quiñones split the community by gender, explaining that women have different access in the labor market than men, and are not guaranteed the same occupational outcomes.

His findings pointed to the conclusion that migration does, in fact, increase the occupation outcomes for migrants. Quiñones found that migrants who were currently working outside of their communities had an average of a 72% chance of moving up one step in the occupational ladder. For men, this typically looked like moving out of the agriculture industry (the primary employment opportunity) to more jobs in the industrial or service industry. Women, on the other hand, shifted from household labor to the service industry or occasionally to agriculture. When looking at migrants who returned to their communities, the increase in occupational outcome was lower, but still significant. This is especially true for women, who on average had a 44% chance of moving one step up in the occupational ladder. Quiñones concludes that the difference between current migrants and returned migrants is most likely due to the fact that while returned migrants have obtained valuable skills from migrating, it is difficult to employ those skills in their home communities.

Looking at Quiñones research, and the clear occupational gains that people receive from migrating, it becomes easier to understand why people migrate. However, Quiñones admits that the opportunity for better employment is not the only reason why people migrate and that oftentimes, people are better off economically if they stayed in their communities. In addition to increased employment, people oftentimes migrate for safety reasons or to reunite with their families. Similarly, despite better economic returns, people don’t always take those into account to return to their communities; they are often forced to or choose to reunite with their families. Interestingly, Quiñones found that women, more so than men, make decisions regarding migration that aren’t necessarily the best choices for their economic benefit. This is due to the patriarchal social pull that women face, which often requires them to not work or to leave their jobs and prioritize their spouses and families. Overall, when looking at research like Quiñones, we see that migration often presents an opportunity for economic occupational gain. However, there can also be reductions in economic improvements, as people don’t always choose to migrate purely to get a better job.