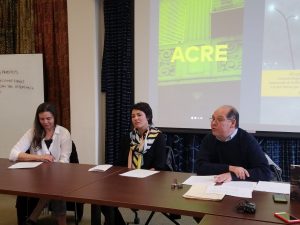 Lucrecia Zappi is a journalist and novelist from Buenos Aires, although she grew up in both Mexico City and Brazil. Her two novels, Acre and Jaguar Negro focus on mythical worlds with vast geographies, using “great poetic vigor” In addition to her novels, Zappi is an avid cook and has done extensive research about baking having published the children’s book  Mil-Folhas about the history of cake making in the sugarcane fields of the new world. LACIS was fortunate enough to welcome Zappi for a Q&A session in which she answered questions about her the themes in her novels such as the juxtaposition of urban and natural landscapes, contemporary social commentary, and memory.

Zappi first answered a question about the significance in the titles of her books by saying that in Acre, which is both a northern state in Brazil and a unit of measurement, she saw the irony in that her English-speaking audience would associate the title with the unit of measurement while her Spanish and Brazilian audience would associate it with the place. In Jaguar Negro, or Black Jaguar in English, Zappi chose the title to represent someone who isn’t quite “all there”, who sees things in the shadows whose existence can be questioned, such as a black jaguar.

Zappi also describes the importance of the setting of her novels in Sao Paulo as well as in Acre, saying that she had a lot of strong memories associated with Sao Paulo, it is the place where she grew up. She also describes the people in Sao Paulo as being somewhat “rough and dangerous” and it is easy to lose yourself in the confusing, winding streets. She juxtaposes this with Acre, a region that is, with its underdeveloped natural landscape, in theory, completely opposite from Sao Paulo. However, Acre is similarly hostile in both its unforgiving natural surroundings and its people, or lack thereof. Zappi says that she enjoyed the idea of having a protagonist that came from an urban environment such as Sao Paulo and getting put into a setting in a country that they are familiar with but a landscape that is completely different.

In addition to this urban vs. rural juxtaposition, Zappi also represents through her novels a sense of urban destruction, often detailing descriptions of cracking concrete and dirty walls. She does this, she says, not to comment on the social situation of Sao Paulo but rather to describe a space in which her characters feel a sense of displacement somewhere where everyone theoretically has a lot in common and looks and acts the same. There is one character in Acre who every night “cleans” the city by getting rid of populations he considers to be undesirable such as homeless people and homosexuals. When asked if this was a social commentary given the current state of Brazil with the rise of right-wing President Bolsonaro, Zappi agrees that it was a social commentary but also a way to describe characters whose morals are somewhat confusing. The character shows a lot of pride being from Sao Paulo and wants to make it a more desirable place. However, he is convinced that it is necessary to do so through homophobic and xenophobic actions.

Characters in Zappi’s novels seem to have very complicated relationships with memory. One character, Marcella, states that she is “not interested in memory” at all while another, Oscar, has violent memories surrounding a pocket knife that haunt him. When asked about the role of memory in her novels and how her own memories played into the novels, Zappi describes how memory in the characters is made to remind them of the person they used to be, to compare it directly to who they have become. For Oscar, he is forced to grapple with the memories of the “hero” he believed that he believed he would be in his youth and come to terms with the boring, monotonous life he lives.

In regards to the work she is currently focusing on, Zappi is in the midst of adapting her first novel, Black Jaguar, into a film. The film, she says, will be produced by the first all-female publishing house in Brazil. Zappi is also in the process of working on a third novel that like her first two, explores themes of isolation and a seeks to place the reader into a “primitive world on the streets”. This novel, which is currently untitled, a group of affluent teenagers, fueled by lowered-inhibitions through alcohol, take to the streets and end up murdering an indigenous man. The story centers on two girls who met the night of the incident, one 16 at the time of the attack and one 18. After serving out their jail sentences in separate facilities, they meet again 10 years later. According to Zappi, she has done a lot of research on the Brazilian prison system as well as indigenous justice, the latter of which is another important theme in the book.