Edibility of a food source is determined by a cultural knowledge of appropriate harvesting and preparation techniques, which may result in the removal of harmful compounds. Apazote, characterized by a pungent, earthy flavor, has long been utilized as both as a culinary staple in Mayan cuisine as well as for medicinal purposes, deworming being one of its common uses. However, there have been reports of fatal poisoning associated with apazote, most especially outside its native range. Causes associated with cases of fatality may include misidentification of the plant, a faulty medicinal preparation with unintended side effects, or environmental contaminants found within an apazote population. Tabitha will be conducting research in Guatemala to investigate these possibilities, alongside community partners that include researchers and students associated with the Universidad de San Carlos in Guatemala City, as well as professionals from a variety of backgrounds, among them chefs, herbarium curators, and medical practitioners. Researchers will document genetically versus environmentally caused traits of apazote, and analyze the chemical make-ups of distinct preparations of the herb. Tabitha is tentatively planning to travel to Guatemala in January 2022 to begin her fieldwork.

Tabitha Faber, Principal Investigator for the “Edibility of Apazote” project. 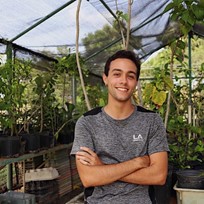 Photo at left: Joshua, a student at Vida Marina in Aguadilla, Puerto Rico. “I believe that our biggest problem is the excessive exploitation of our natural resources for self-profit. Nature has taught me that our purpose in this world is to protect and care for it, not take advantage of it. I think we should focus on combating ignorance in order to restore and protect nature. #protectourearth”

“Gente de la Tierra” is the byproduct of an in-person conference that was hosted in Guadalajara by the Earth Partnership and the Museo de Ciencias Ambientales. The Earth Partnership, associated with the University of Wisconsin-Madison’s Department of Planning and Landscape Architecture, aims to promote community learning in a way that encourages native habitat restoration. Mirroring this goal, “Gente de la Tierra” promises “local-to-global” youth civic engagement for environmental stewardship.  With the financial support of the LACIS SEED grant, Carlos and his team now aim to further cultivate the project by exploring the possibility of a broader web-based platform. They also seek to investigate the impact of the photoblog thus far, probing to see if participation in the storytelling has had an impact on students’ understanding of or engagement with environmental issues in their own communities.