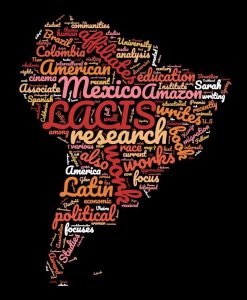 LACIS is proud to highlight selected publications of our Affiliated Faculty. Please click on the names in blue to see the most recent faculty publications, projects and awards that have been shared with us.

First, however, please welcome our newest affiliates: Mariana Pacheco (Curriculum and Instruction), Ken Keefover-Ring (Botany), Maria Moreno (Global Health), Mary Beth Collins (Center for Community and Non-Profit Studies), and Marcella Hayes, a historian of Latin America, with an emphasis on the Andes, who will teach LACIS 260 (Introduction to Latin American Studies) in Spring 2022.

Similar to Marcella, whose book manuscript is tentatively titled The Black Spaniards: The Color of Political Authority in Seventeenth-Century Lima, various other affiliated faculty research focuses on race and indigeneity. Almita Miranda’s connects issues of race and gender in the context of political economy, and immigration, in the U.S. and Mexico. Victor Goldgel-Carballo is the author of an award-winning book Cuando lo nuevo conquistó las America’s, which was granted Premio Iberoamericano by the Latin American Studies Association, and Premio Ezequiel Martínez Estrada by Casa de las Américas. Goldgel-Carballo’s current research dwells on race relationships in nineteenth and twentieth century Cuba and intellectual property in Latin America. He has recently co-edited a volume titled Piracy and Intellectual Property in Latin America: Rethinking Creativity and the Common Good (Routledge University Press). Elizabeth Hennessy lead a team of scholars who won The Andrew W. Mellon Foundation $5 million award to fund an interdisciplinary, multi-year project to advance anti-racist practices and pedagogy in science, technology, engineering, mathematics, and medicine (STEMM). Elizabeth is an author of On the Backs of Tortoises Darwin, the Galapagos, and the Fate of an Evolutionary Eden (Yale University Press). This book received various enthusiastic reviews and was a Finalist for the 2020 PEN/E.O. Wilson Literary Science Writing Award. 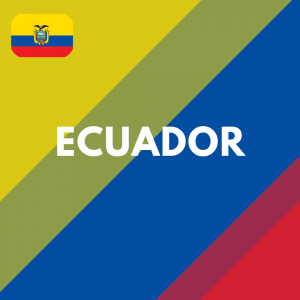 Various other affiliates also work on themes connected to indigeneity and environment: Armando Muyolema researches bilingual intercultural education in Ecuadorian Quechua areas, and he is also an instructor of Quechua. Lisa Naughton writes about conservation topics in Ecuador and Peru, and recently with a focus on gold-mining. Under Lisa’s guidance, a team of UW-Madison Geography faculty, graduate students and alumni launched a new version of an interactive, online role-playing exercise called Tambopata, Peru: Protecting Forests and Empowering Local Communities. This fall, more than 20 instructors from higher ed. institutions in the U.S., Canada and UK used this open-access teaching resource in their teaching. Ruth Goldstein, assistant professor in Women’s Studies Program focuses on the area bordering of Peru, Brazil and Bolivia. In her book, titled Life in Traffic she traces the traffic of gold along with ayahuasca, maca and women. Adrian Treves studies human and wild animals’ interactions in the agricultural contexts of Latin America. Christa Olson writes about aesthetics and rhetoric of national identity, democracy, and indigeneity in Ecuador. Diego Román researches intercultural bilingual (Quechua-Spanish) education programs in Ecuador, particularly in the Galapagos Islands. Erika Marín-Spiotta, awarded a Presidential Early Career Award for Scientists and Engineers, and Romnes Faculty Fellowship, researches forest soils in the context of climate change, but recently she has also published on gender equality in scientific research practices. Lori Diprete Brown, Director of the 4W (Women & Well-being in Wisconsin & the World) Initiative, works on health, wellbeing, and gender in environmental context. Isabelle Druc researches ancient Peruvian pottery.

Political crises, violence with human (and non-human) rights focus in Argentina, Mexico, and Colombia constitute the context of research of Ksenija Bilbija, Glen Close, Paola Hernández, and Beatriz Botero, from literary and cultural studies perspectives. Violence and human rights, from the perspective of the international law, are two important themes in the work of Alexandra Huneeus, the co-founder of the Human Rights Program on our campus. She has recently been nominated as Commissioner in the OAS Inter-American Commission of Human Rights, and her writing is focused on the territory and non-humans as victims of the armed conflicts. Ksenija Bilbija is a world expert on the Cartonera publishers, an alternative editorial phenomenon that responds to economic, political, and ecological exhaustion. She is also interested in women’s experience of political violence. Her book Ni perversas ni traidoras: Ficciones de colaboración femenina en las dictaduras de Argentina y Chile is forthcoming in Cuarto Propio. Kate Vieira is an expert on literacy and writing for peace, love and money, and her research focuses on Azores and Colombia. Diana Rodríguez-Gómez, and Beatriz Botero are similarly concerned with education for peace in Colombia and Ecuador. Beatriz Botero’s recent book analyzes gender violence in Latin American literature from a psychoanalytic perspective. Paola Hernández reflects on theater and performance as political interventions in the context of human rights. She has recently published Staging Lives in Latin American Theater: Bodies, Objects, Archives (Northwestern University Pres, 2021). Glen Close, known in Hispanism, as an expert on violence in crime, and narco-fiction and film, has now taken a turn to consider violence committed against animals, and works with documentary films depicting slaughterhouses. 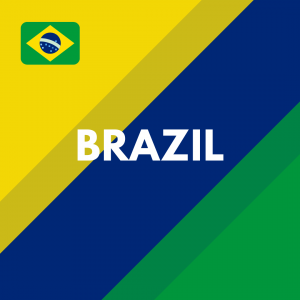 Various LACIS affiliates’ work focus on Brazil. Holly Gibbs, asks how the soy moratorium contributes to the preservation of the rain forest, and how environmental policies may promote productivity. Jenna Nobles studies behavior changes in response to health risk, including the Zika threat in Brazil. Falina Enríquez writes about music and musicians in Recife. Lesley Bartlett works on a comparative analysis of educational practices in Latin America, with a special focus on Brazil. Margaret R. Hawkins focuses on language, mobility and education in community-based settings in domestic and global contexts. She has just published a book, titled Transmodal Communications: Transpositioning Semiotics and Relations. (Clevedon UK: Multilingual Matters). Kathryn Sanchez, who published a book on performance and stardom (Creating Carmen Miranda: Race, Camp, and Transnational Stardom, Vanderbilt University Press, 2016), is currently working on a book about films depicting the Amazon. Karen Strier, given the Recognition Award, Operação Primatas, works on Brazilian mammals, and other endangered species, and the 6th edition of her Primate Behavior Ecology has just been published by Routledge. Sarah Ann Wells, specializes in Brazilian cinema. Her book, Media Laboratories, Late Modernist Authorship in South America won the Best Book (Humanities category) from the Southern Cone Section of the Latin American Studies Association. Luis Madureira publishes on Brazilian and Lusophone African literature and film. Katherine Jensen’s research interests include race, political sociology, and forced migration in the Americas, with a focus on Brazil. 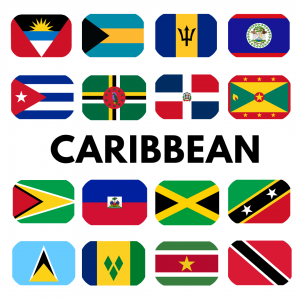 The Caribbean is another area of research strongly represented by LACIS affiliates. Apart from Victor Goldgel-Carballo, mentioned in the opening paragraph, whose work focuses on the colonial period in the Caribbean, we have various faculty members interested in the contemporary period. Guillermina De Ferrari, currently a Senior Fellow with the Institute of Research in the Humanities, and recently awarded the prestigious Guggenheim Fellowship and Halls-Bascom Named Professorship, analyzes the tension between overdetermination by historical, political and ecological forces, and the demand for ethics in the contemporary Caribbean. Pablo Gómez’s The Experiential Caribbean: Creating Knowledge and Healing in the Early Modern Atlantic (William H. Welch medal, the Albert J. Raboteau Book Prize, and Honorable Mention-Bolton-Johnson Book Prize), explores belief-making and the creation of evidence around the human body and the natural world in the early modern Caribbean. He has recently co-edited the volume, The Gray Zones of Medicine, that examines the role of unlicensed health practitioners in the shaping of Latin American history from the colonial time to the present. Brenda Plummer, this last year, was awarded the Karen F. Johnson Teaching Award, and has authored articles about how financialization affected the Caribbean. Cherene Sherrard-Johnson works on Caribbean novels. Jerome Camal researches Caribbean music. Kathryn Kirchgasler investigates power relations within science and health and teacher education with a focus on race in Puerto Rico. From the Caribbean, we move to Mexico and Central America. Jessica Hurley specializes in Maya studies with a focus on women, and she is also an instructor of Yucatec Maya. Grant Armstrong focuses on the morphology, syntax, and semantics of Spanish, and also of Yucatec Maya. Claudia Calderón works on agroecology in the Mayan communities of Guatemala. Kata Beilin, LACIS Faculty Director, works on a book and a film focused on the revival of the Mayan culture in the context of resistance to industrial agriculture in Yucatan. 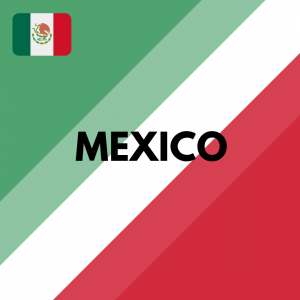 Sarah Clayton explores the ways in which the growth and decline of pre-colonial cities and states in Mexico transformed surrounding landscapes and communities, among them the famous city of Teotihuacán. Alfonso Morales, who was recently awarded a Vilas Distinguished Achievement Professor Award, focuses on food security, and climate change in Mexico as well as dietary habits in a health context. Michel Wattiaux works on the sustainability of small holder farms in Mexico. Jorge Osorio conducts research on viral diseases and zoonotic pathogens in Mexico and Colombia. Sarah McKinnon is writing a book on the discursive representations of Mexico in the US rhetoric. Edna Ledesma works on Latinos in urban settings and the U.S./Mexico border. LACIS Associate Director Alberto Vargas’ research interests are in sustainability and in the interplay of environment and development in Latin America, particularly in Mexico. He has recently become interested in the research on psychedelics and delivered a presentation on “Psychedelics in Latin America” during the seminar of the recently opened Transdisciplinary Center for Research in Psychoactive Substances. Benjamin Márquez works on Latinos’ histories in the United States and he has just published a book titled The Politics of Patronage, Lawyers, Philanthropy and the Mexican American Legal Defense and Educational Fund (UT, Press, 2021).

Historical, economic, political and discursive analysis, as well as the analysis of the media are among the strongest research areas among LACIS affiliates. Hernando Rojas offers a cutting-edge analysis of the relationship between media and political disposition and action. Patrick Iber focuses on the social sciences discourses on poverty. He also publishes articles on current events and history in The New York Times, The New Republic and Dissent, and this last year these articles covered current events in Cuba, and Mexico. Rajiv Rao’s linguistic research is interested in the meaning of intonation in different Latin American dialects and in phonetics and phonology in contact. Ellen Sapega writes about Portuguese historical memories in Second World War Documentaries. Laura Schecter researches development economics, in rural Paraguay, including women’s and social media role. Maria Muniagurria works on trade, economic growth and family dynamics in Argentina. 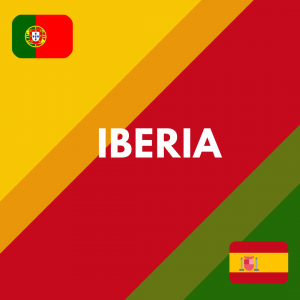 Spanish Golden Age is a historically strong area in UW-Madison’s Department of Spanish and Portuguese. Steven Hutchinson, known for his work on Cervantes, has published Frontier Narratives: Liminal Lives in Early Modern Mediterranean which examines identities and alterities between Christianity and Islam in early modern times. Mercedes Alcalá Galán approaches the works of Cervantes, and other literary texts and art from the Spanish Golden Age through the perspective of race, gender and sexuality. Her book titled, ‘Con esta carga nacemos las mujeres’: Discursos sobre el cuerpo femenino en la España de Cervantes has been recently published in Vervuert.

This is by no means a complete map, so if your work is not mentioned and you would like us to talk about it in our next newsletter, please send us your information. We are always looking forward to hearing about your new projects and publications. We will be updating this map periodically.